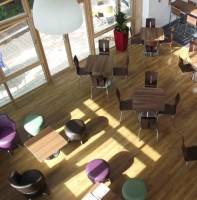 Futurology is notoriously a mug’s game. Especially when it comes to making predictions about technology. Just ask Ken Olson, the founder of DEC who in 1977 pronounced that ‘there is no reason anyone would want a computer in their home’. Or Bill Gates himself who once claimed that Microsoft ‘will never make a 32 bit operating system’. Most recently Steve Ballmer, a billionaire executive said in 2007 ‘there’s no chance that the iPhone is going to get any significant market share.’ But mone of these retrosepctively viewed dodgy predictions should make us blind to those that we know will certainly come true, especially those based on what we know is happening in the present.

This is typified by recent research carried out by Cass Business School and Henley Business School and presented in a new book called Future Work: How Businesses Can Adapt and Thrive in the New World of Work. It found that found that two-thirds of the 360 managers it surveyed believe that there would be a revolution in working practices over the coming decade.

Ninety per cent said that staff were more productive when empowered to decide when and where and how to work.
The only quibble I would have with this is that it won’t take another ten years for this to happen because the process is already well underway. Human Resources magazine recently polled senior HR professionals on their ideas of what a head office of the future would look like, and found that by 2014 around 23 per cent of respondents hope for a more decentralised approach to head office power and 14 per cent hope for a ‘virtual’ head office, staffed by flexible workers, homeworkers or global workers. And while 91 per cent of respondents see ideas for improvement in their organisation coming from the top today, just 18 per cent think this will still be the case in five years.

So we know it will happen, we’re just not sure exactly how. According to the HR survey while more than two thirds of employers are already carrying out cost cutting programmes in their head office, more than a third of these have not given any thought to the future shape of their organisation. So there’s still work to do.

We’ve been here before. Many managers will recall a flurry of interest in the 1990s in what we then referred to as New Ways of Working. The debate at that time that was also characterised by the extrapolation of current trends towards the adoption of flexible working and desk sharing and the conclusion that the office itself was a goner.

What we now see with the benefit of hindsight is that while the world we knew was indeed about to disappear, the office wasn’t. What has replaced it has been somewhat different to many of the prognoses. And the same will be true now.

The reason for this is clear. While we are potentially free to do a great many new things, there is one cog in the machine that turns at its own rate. People are essentially the same creatures that hunted and gathered on the plains of Africa thousands of years ago. They have the same needs for company, the structuring of time, a sense of belonging and security.

Work of course if just one of the ways we meet these needs. So while offices will undoubtedly continue to get leaner, supporting more people from the same or less space, their essential relationship with people will remain. They will still provide the glue that binds people to the organisation.

However space will be and is being designed and managed more intelligently, with better, faster and more intuitive technology. There will be even more focus on social spaces and shared desks, in particular to support the needs of mobile workers and visitors to the building. There will be an ever greater emphasis on identity, both for clients and employees as a way of securing their relationships with each organisation.

The potential benefits of this new role for the office is why it is so important to ensure that desk sharing, and all flexible working practices, are introduced intelligently so that the organisation can meet its own financial and operational objectives without alienating the very people the office is meant to serve. The workplace should be there to help people be more productive, not restrict and alienate them and make them less effective. So there should be plenty of space available to accommodate everybody who might need it. People should feel a degree of empowerment to control the space, even if they do not ‘own’ it as they may once have done.