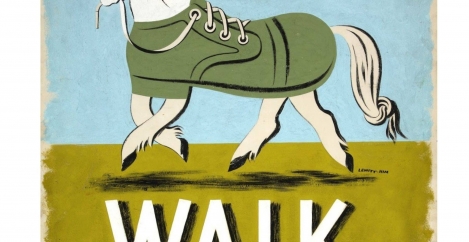 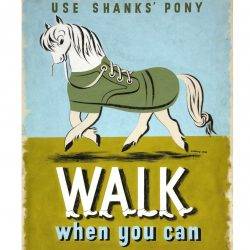 According to a widely reported government study in today’s news, 40 percent of middle aged English adults do not even manage a ten minute walk each month. The report from Public Health England says that so many people are sedentary that official activity guidelines are so unrealistic and people should be encouraged to walk ten minutes a day – half the current guidance – to improve general levels of health and mental wellbeing. Little steps, in other words. We can confidently say that the underlying problem here is cultural, including the amount of time people spend on their backsides at work. This is in spite of all the evidence that shows that we may not only be fitter and happier by moving more but more creative too.

The study from Public Health England found that about 6.3 million people aged between 40 and 60 say that they have not walked at a brisk pace for ten minutes continuously in the past month, based on their survey of 72,000 people. This represents 45 per cent of men and 38 per cent of women in the age group. About half of them get some exercise through other means but an incredible fifth of the middle-aged are defined as completely inactive, according to the survey. The average person walks 15 miles less in a year than they did in the mid-1990s. The report says that, for the inactive, most of the health benefits arise from even moderate levels of activity.

Other research shows that this is not just about health. According to a new study from researchers at Iowa State University published in the journal Emotion claims that even a short walk can have a significant effect on our mood. The research takes account of extraneous factors such as sunshine, fresh air and social activity to conclude that the mere act of walking is enough to make us happier in itself.

According to the researchers, this is linked to the evolutionary association between movement and seeking goals, which once meant primarily food. This hardwired association between positive emotions and rewards remains with us and causes the researchers to conclude: “movement not only causes increased positive affect [emotional feelings] … but movement partially embodies, or in a sense reflects, positive affect. Taken together our findings suggest that incidental ambulation has a more robust and pervasive influence on affect than previously thought” and that their results might even explain why – as shown by prior research – we are generally quite hopeless at predicting our future mood. “People may underestimate the extent to which just getting off their couch and going for a walk will benefit their mood as they focus on momentarily perceived barriers rather than eventual mood benefits.”

Walking can even make us more creative, according to Marily Oppezzo and Daniel Schwartz of Stanford University who published a study in the Journal of Experimental Psychology: Learning, Memory, and Cognition, that showed people are more creative when they are active. The study measured how ‘divergent thinking’ is affected by sitting and walking. They found that people came up with more creative ideas while walking. In addition, the effects of walking carried over after people had stopped walking. You may be able to think more creatively when you come back to your desk.