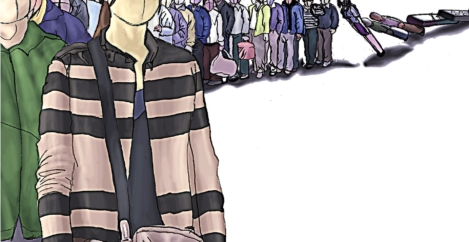 Redundancies set to double the peak reached in the 2008 recession 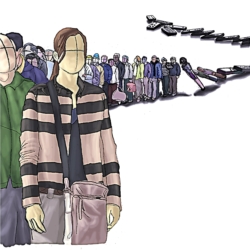 New analysis of official data released to the Institute for Employment Studies (IES) claims that between May and July 2020, employers notified government of nearly 380,000 potential redundancies. This is more than double the peak reached in the Great Recession, when 180,000 staff were notified as being at risk between January and March 2009.

Employers are required to notify the Insolvency Service of all large-scale redundancies, but not where fewer than 20 staff will be made redundant. This means that actual redundancies tend to be higher than the figures covered in official notifications. Based on an analysis of the relationship between notified and actual redundancies, the IES estimates that we are likely to see around 450,000 redundancies in the autumn alone. However, this figure could exceed 700,000 if redundancy notifications continue to rise.

Either way, redundancies in the autumn are on course to far exceed the peak reached in the last downturn (of 306,000) and would be the highest figure since at least 1995 (when the Labour Force Survey started collecting data on redundancies).

“Half a million people likely to lose their jobs in the coming months.”

The analysis is based on Insolvency Service data collected from employers planning 20 or more redundancies (which is reported via ‘HR1 forms’). The figures were released to IES following a Freedom of Information request. This is then compared with estimates of actual redundancies, reported in the Labour Force Survey (LFS).

The graph below shows these two sources of data together – HR1 forms and LFS estimates – and illustrates the scale of the unfolding jobs crisis. The actual number of redundancies (yellow line) tends to be higher than the number notified to the Insolvency Service (blue line) because only those exercises that are likely to lead to more than 20 redundancies need to be notified. If fewer than 20 redundancies are planned then the Insolvency Service does not need to be notified. 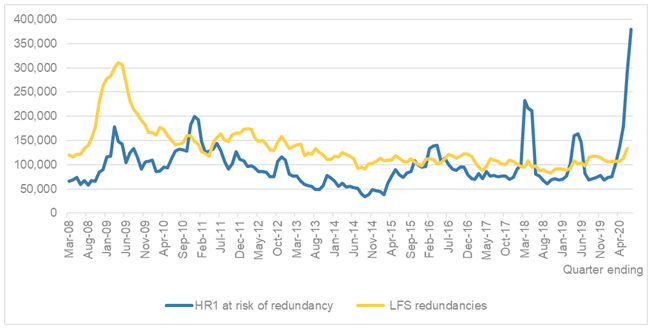 The IES briefing calls for the government to take action in the forthcoming Spending Review in three areas:

• Guaranteed ‘rapid response’ services in all parts of the country to provide employment and training support to those facing redundancy – delivered in partnership by Jobcentre Plus, colleges/ training providers, recruiters and local government.
• Raising the threshold at which employers start paying National Insurance Contributions, to reduce labour costs and support aggregate employment demand.
• Tightly targeted support for firms and industries facing short-term disruption due to the pandemic but that remain viable in the longer-term – for example in entertainment, leisure and aviation – ideally linked to commitments not to lay staff off.

It also calls for government to regularly publish HR1 data, including breakdowns by sector and region, so as to help areas and industries to prepare for and respond to the crisis.

“We can do a lot more to minimise the job losses and support those who are most at risk.”

Commenting on the figures, IES Director Tony Wilson said: “This data lays bare the scale of the jobs crisis that we’re facing in the autumn, with half a million people likely to lose their jobs in the coming months. The sad reality is that this restructuring cannot be averted entirely, but we can do a lot more to minimise the job losses and support those who are most at risk.

“Our top priority must be to support those facing the prospect of losing their jobs to find new, secure and good quality work as quickly as possible. At the same time we are in the midst now of a significant recession and we need urgent action to support employment demand. The best way to do this would be to reduce labour taxes, by raising the threshold at which employers pay National Insurance.

“We also mustn’t accept that all of these redundancies are inevitable. Although most of those who were furloughed by their employers are now back at work, there are still many parts of the economy where perfectly viable businesses cannot bring people back because of the ongoing disruption caused by the pandemic. So we need tightly targeted support to help these firms ride out the next few months, where they can commit to not laying staff off.”

The next chapter for office life, remote work and the stories we tell about it all Parents dedicate two extra working days a month to new Covid school routine