Religious leaders have their say on ongoing work-life balance debate 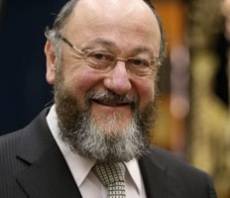 The UK’s Chief Rabbi Ephraim Mirvis has appealed to people to free themselves from digital slavery for at least one day a week. Speaking in The Times, the Chief Rabbi (pictured above) calls on all people to give up their smartphones, tablets and other devices for at least a day a week as part of a campaign to revive adherence to the Jewish custom of the Shabbat in which people do not work between sunset on Friday and Saturday. He has been joined in his call by the Archbishop of Canterbury and The Pope, both of whom have urged people earlier this year to focus less time gazing into the unblinking eye of their devices and instead focussing on the real world, its issues and the people around them as a way of achieving a better work-life balance. The Chief Rabbi claims in the interview that the ceaseless need to respond to electronic messages distracts people from family life, communal living and spiritual reflection.

Speaking to The Times, he said: “The impact is sensational.  Instead of being slaves to modern technology, we are able to control our own agendas. Just knowing the phone won’t ring and there is no expectation for one to reply to texts, messages or emails one enjoys a wonderful day reserved for spiritual contemplation and healthy family and community engagement. I recommend such a system to everyone.”

In June, the Archbishop of Canterbury addressed the same issue in a speech to hundreds of MPs, peers, church and charity representatives at the annual National Parliamentary Prayer Breakfast in London. “In a world in which cultures overlap constantly and are communicated instantly – and, judging from what I get, often with some friction – you need space to adapt and to meet with one another, and you have to trust the sovereign grace of God for the consequences,” he said. “The comments that even 20 years ago took months to reach the far corners of the Earth now, as we know, take seconds. Instant reaction has replaced reflective comment. The best answer to a complex issue … is not always given in 140 characters. The church of this century must be a generous church because of that communications revolution, because of technology because we are face to face with everyone everywhere always, in a way we never have been in history.”

Meanwhile in August, The Pope took the opportunity to rail against the pernicious effects of mobile technology on young people. As reported in The Catholic Herald, he told a gathering of tens of thousands of Catholic pilgrims that “time is a gift from God” but, like other gifts, it must be used well. “Perhaps many young people waste too much time in useless things: chatting on the internet or with your mobile phone … the products of technology that should simplify and improve the quality of life, but sometimes take attention away from what is really important.”

Orgatec preview: the next generation workplace is all about settings The death of the office desk may have been exaggerated