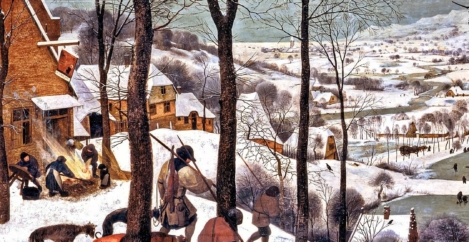 One of the most significant consequences of the 2008 economic crash was a remarkable shift in the nature of employment. The recession led to a surge in the number of people categorised as self-employed. The numbers have been increasing ever since, albeit at a more stable rate. By the end of 2019, the number of self-employed people in the UK exceeded five million people for the first time. That’s fifteen percent of the workforce.

Although this was often characterised as a voluntary shift, and even as evidence of entrepreneurialism, for many people it was and remains a necessity. Where a job doesn’t exist, they create their own sources of income. It has since become clear that many would prefer to work in traditional employment but that doesn’t always exist (or at least not in the right way).

As ever, the big numbers that frame these issues obscure some realities. In particular ‘self-employed’ can cover a number of forms of work. As the ONS notes in its report on the data (see below), ‘the aggregate number of the self-employed hides some differences in the composition of different types of self-employed. In particular, the number of self-employed reporting themselves as working on their own, or with a partner but no employees, has increased between 2001 and 2016, while those who report themselves as having employees has fallen over the same period.’ 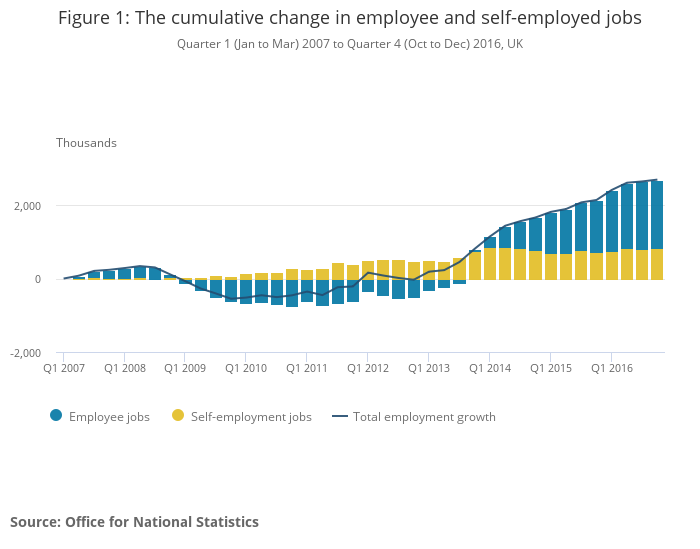 The common narrative also presupposes generous income levels for the self-employed. But this is not really the case, as FlipChartRick points out in this analysis from earlier this year:

No wonder that around one in five self-employed people felt insecure even before the pandemic and couldn’t last a year trying to make ends meet. Little wonder that so many of them and those in the so-called gig economy would much prefer traditional work, in particular how they might be willing to exchange some income and many of the benefits of self-employment for greater security.

The race to the bottom

A very similar phenomenon is very likely to happen in response to the Covid-19 pandemic. This time it will affect a greater number of people, in new ways and many of them will sleepwalk into it in the name of remote work. They may think they’re merely switching their place and time of work, but are about to discover that they are also likely to be adopting a new, insecure and worse-paid form of work.

The US is further along this path than the UK, at least in the short term. A report from Bloomberg highlights how a rush to freelancing sites as traditional work dries up is applying downward pressure on incomes. On just one of these sites, Freelancer.com, used by 46 million people, “pay for an average job has dropped by about 20 percent in the past six months — partly the result of more people competing for the available projects.”

This shift will not just be marked by the availability of traditional jobs but also the nature of the work people do. The lockdown has driven a new obsession with productivity. We are again talking about work as the exchange of money for units of labour.

Once it reverts to that, firms will ask themselves what – for them – is a perfectly rational question. If you can do your job anywhere, can anyone do your job?

They will inevitably answer yes, probably. Their workers will find that shorn of the context of the traditional workplace and job structure, and with work boiled down to labour transactions, their work can indeed be done by anyone, and probably more cheaply.

This competition won’t just be driven by local markets. People will end up competing against others within very different sorts of economies and with different personal circumstances. The marketplaces for these competitions already exist and are becoming far more sophisticated. They are not just forums to allow people to find work when jobs are unavailable.

This is the future of work for many people. Some of the most interesting and best informed commentators talking about this kind of thing, including Li Jin, Andy Spence, Dror Poleg and Antony Slumbers take a pretty Panglossian view on it. And while I agree with most of what they say on its own terms , I always notice that they can only talk as they do a lot of the time by ignoring huge numbers of people, their location, age, gender, race, class and personalities along with certain other issues.

The most successful workers do better and better. Everyone else is going to do worse

Not everybody will do well out of this new era of work, however well these platforms are designed or however much we redesign work. Many, perhaps the majority, will do badly, including the young, the old and the less well off. It won’t only be their finances that suffer. It will be their mental health and wellbeing too. And if they think they’ve been left behind by globalisation already, wait until they come up against the freelancers on PeoplePerHour who will do their job for ten percent of minimum wage (minus service fees to the individuals who run these sites).

So while some will thrive, for most people, their experience will be of a race to the bottom. These trends were already evident before this year’s lockdown. Some people saw it coming, including Alana Semuels in this article in The Atlantic.

We never did find a way to help the losers of globalization become winners.

It’s possible that Americans will still decide that this latest wave of outsourcing is, on the whole, beneficial, too. But the usual mantra told to people who have lost their jobs to outsourcing—get more education, get more training—doesn’t make sense in an economy where educated people across the world are competing: On Fiverr, I found someone in Pakistan offering to do architectural designs for just $5.

For the many talented people who now have a global platform to sell their services, Fiverr and other sites represent a huge opportunity. The people who prosper are “the cream of the crop”… One recent paper has predicted that a Matthew effect could begin to dominate the global gig economy, in which the most successful workers do better and better. Everyone else, though, is going to do worse.

This will have to be addressed at a political level because businesses will tend to do what is best for them. Some of the questions are laid out by Andy Spence in the piece linked above, but it will ultimately depend on society and politicians grasping the consequences, and especially those who stand to do well from it all. Perhaps them in particular. If there’s one lesson we can all learn from 2020 it’s that the ignored have a tendency to make themselves known at some point.

Image: From Hunters in the Snow by Peter Bruegel The Elder