Despite employers offering staff access to a gym to help promote wellness, actually getting people to use the fitness facilities is another matter. The answer could be to bring the fitness equipment directly to their office; as new research shows that employees who use treadmill workstations as they work not only receive physical benefits but also are more productive. According to a recently published study by researchers from The University of Texas at Arlington, the Mayo Clinic and the University of Minnesota, sedentary employees from a non-profit financial service company who had their current cubicles and offices outfitted with treadmill desks were found to burn an average of 74 more calories per day than they did before they received the treadmill workstation. They were also found to be more productive.

The desks could be raised and lowered with the push of a button, and the employees could choose to sit, stand or walk at their discretion. The employees were surveyed for 52 weeks, and wore an accelerometer that kept track of their daily calories burned.

Darla Hamann, an assistant professor in the UT Arlington School of Urban and Public Affairs, who co-authored“Treadmill Workstations: The Effects of Walking while Working on Physical Activity and Work Performance”, with four colleagues explained: “What’s great about that is that employees who had the treadmill workstations became more productive in addition to becoming more active,” Hamann said. “Walking on the treadmill didn’t come at the expense of being a productive worker. Walking seemed to augment productivity.”

The study surveyed roughly 200 employees per week at a financial services company. Forty had treadmill desks. The elevated workstations allowed employees to walk up to two miles per hour while working at their computers.

“I think this paper could lead companies to offer treadmill workstations for their employees as part of wellness programs nationwide,” Hamann said. “I think it could eventually become a well-being initiative as part of a cafeteria plan of benefits for employees.” 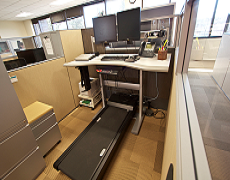 David Coursey, director of the master’s in Public Administration degree and an associate professor at UT Arlington, said companies often rely on new computers and other high-tech tools to improve employees’ performance.

“Dr. Hamann’s research is among the relatively few to remind us of the importance of employee health in increasing productivity,” Coursey said.

In addition, Hamann said the research showed a carryover effect of exercise becoming a habit for employees choosing to use the treadmill workstation.

“It’s like the treadmill workstation served as a reminder for future physical activity,” Hamann said. “It reinforced the idea to exercise.”

Hamann said obesity in the United States and other westernized countries has become an epidemic leading to heart disease, diabetes and a host of other maladies. A leading cause of the epidemic is that people are no longer active at work.

“Our thinking was what could a treadmill – even one operating a slow speed – accomplish in the work environment?” Hamann said.