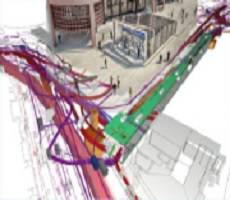 Alan Muse, Director of Built Environment Professional Groups (RICS) is calling for a cultural shift to ensure that Building Information Modelling (BIM) is more widely adopted. This follows the results of a survey taken at the RICS National BIM conference which revealed that despite its overwhelming recognition within the built environment nearly half of respondents were still not using the process, with 46 per cent identifying minimal client demand as a major factor preventing their implementation of BIM. Comments Muse: “Quite simply, some clients are not yet recognising the efficiencies that BIM can bring”, which is the reason why RICs is now developing a BIM accreditation standard.

Building Information Modelling (BIM) utilizes digital technologies which offer more efficient methods of designing, creating and maintaining the built environment. In essence BIM embeds key product and asset data within multi-dimensional computer models that can be used for effective management of information throughout the project lifecycle – from earliest inception through occupation.

Comments Muse: “However, to achieve a change in client attitudes there needs to be a seismic shift in the industry. Some 23 per cent of respondents identified culture, and 15 per cent a lack of industry collaboration, as barriers to implementing BIM.

“Collaboration is particularly important as it is only when BIM is implemented at every stage of the property’s life-cycle from design and build through occupation and management that processes and financial efficiencies can be maximised.”

He adds: “It is clear that something needs to be done to help push a cultural shift within the sector.”

As a result, RICS is taking active steps in supporting its members and the wider industry with the development of a BIM accreditation that directly addresses the current lack of standards in BIM, identified by 17 per cent of survey respondents as a barrier to BIM uptake, and provides the necessary training that 17 per cent of respondents called for RICS to provide.

Muse believes this accreditation should help to prompt a shift in attitudes within and beyond the sector by supporting professionals in delivering consistency in their approach to BIM, while the improved efficiency in delivery of service should result in cost savings, thereby increasing client demand for BIM.

Muse says the Institute is already working to initiate this through representation on the Construction Industry Council (CIC), the government-initiated Taskgroup for BIM, and the Government Trial Project Support Group.

It is also looking to work collaboratively with key industry bodies including the RIBA, the British Institute of Facilities Management, and the British Property Federation, to ensure BIM guidance is “joined up” across all sectors – thereby maximising its potential success.

He concludes: “If fully embraced, BIM will be a positive force for change in the construction and property industry and beyond. We are trying to enable the realisation of this potential by providing the tools and influence the industry has identified are needed. However, further work is needed if the industry is fully to realise BIM’s potential.”