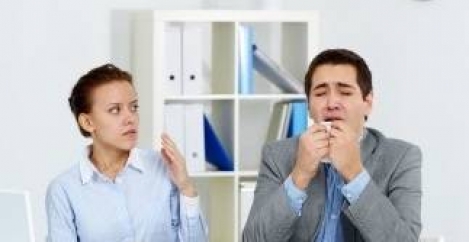 Sick staff pressured to come to work, despite reduced productivity 0 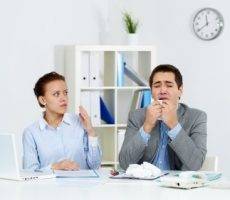 Over two thirds of employees (68.3 percent) say that they feel guilty for taking sick days despite the fact that they’re vastly less productive when they do show up ill, a new survey suggests. Yet more than two thirds (67.5 percent) still go into work when they are unwell, and over half (54.6 percent) report that their employer does not send them home when they’ve felt ill at work. According to the research from CV-Library, the average employee (66.4 percent) only takes between one to two sick days a year; and of those that do take time off, over a third (34.2 percent) of employees say their managers put pressure on them to return to work early and a further 44.7 percent said their employer questions their sickness when they are ill. Worse still, it seems that over half (52.9 percent) of managers still contact their employees whilst they are off sick, adding extra pressure and not giving staff time, and space, to relax and recover.

Unsurprisingly, the study, which surveyed 1,300 UK workers, goes on to reveal that 86.5 percent of workers feel much less productive at work when they are unwell. The majority (83.8 percent) advise that it is unbeneficial for businesses to have staff in when they’re unwell and 84.3 percent of employees believe they should not go into work when they’re sick.

Lee Biggins, founder and managing director of CV-Library, commented: “Staff productivity and wellbeing are key contributors to the success of any business and this is why it’s important to promote best practice in the workplace. Breeding a culture that encourages people to come to work when sick is not beneficial to employees or businesses and if workers are clearly ill, they should be advised to go home and recover. This means that they can then return to work, happy, engaged and ready to make a valuable contribution to the business.”

“Managers play an important role in reassuring staff that taking time out to recuperate is ok, but it’s clear from our research that the majority of workers feel the pressure from their boss to return to work before they are ready, and this probably stems from the top.

“While it might be frustrating for businesses to operate on a lower head count, in the long run, it’s better for everyone that poorly employees are not in the office; germs aren’t spread, staff recover more quickly and the hours they do spend at work are much more productive.”

The research also explored the topic of sickness entitlements, revealing that only half (55.9 percent) of companies offer sick pay, placing many of the nation’s workers in a financial conundrum if they are unable to afford time off. In comparison, 94.3 percent of workers believe that all businesses should continue to pay their employees when they are off sick.

Biggins concludes: “While some employers are wary that staff could take advantage of sick pay when they aren’t unwell, it should be seen as a positive move and shows that a business cares about its staff. Not offering any sickness entitlement can force people who are genuinely ill to come into the office and share their germs, when they should be wrapped up in bed.

“Reassuring staff by offering a small sickness entitlement and then tracking absence throughout the year is a much more efficient way of managing illness and productivity within a business.”