While we may have grown accustomed in many ways to the world’s addiction to connectivity, and even expressed our own frustration that people are more interested in the contents of their phones than us, things are clearly going way too far if you believe the news that nearly 1 in 10 Americans have confessed to using their smartphones while having sex. While that may be extreme, the manifestation of this addiction is now routine with nearly three in four smartphone users surveyed by Harris Interactive for the Jumio 2013 Mobile Consumer Habits survey admitting that they are rarely more than five feet away from their devices.

More than a third said they use their device at the cinema and 12 percent while in the shower.  The report concedes that 12 percent of respondents believe their phones hamper their relationships with other people. The problem is particularly acute in the 18 to 34 year old age group where as many as a fifth of people claim to use their smartphone while having sex. Other places where people use their smartphones include during a dinner date (33percent), during a school function (32percent), at a church or place of worship (19per cent), and alarmingly while driving (55 percent).

“People view their smartphones as an extension of themselves, taking them everywhere they go – even the most unorthodox places — from the shower to their commute, from the dinner table to the bedroom,” said Marc Barach, chief marketing and strategy officer at Jumio. 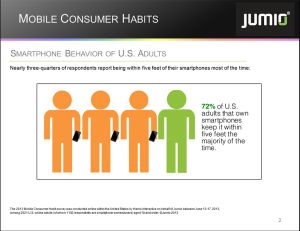 Another survey has highlighted the questionable phone etiquette of small business owners who are so fearful of missing an important call that over two thirds admit to taking business calls while on the toilet. The report commissioned by Penelope, a telephone answering service (naturally), asked 2,000 micro-business owners for their views. Nearly a fifth (18 percent) admitted to taking a business call during a funeral and 13 percent at a wedding.