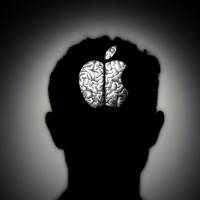 The mechanisms by which this occurs are well known. Every part of our body has its own processing centre in the brain’s somatosensory cortex and so artists, musicians and artisans have measurably different brain structures to other people.

One of the research authors, Arko Ghosh from the Institute of Neuroinformatics of the University of Zürich and ETH Zürich claims that there are clear parallels between musicians and smartphone users in this learning process.  “At first glance, this discovery seems comparable to what happens in violinists,” he said. “The digital technology we use on a daily basis shapes the sensory processing in our brains – and on a scale that surprised us. I was also struck by how much of the inter-individual variations in the fingertip-associated brain signals could be simply explained by evaluating the smartphone logs.”

To link smartphone use to brain activity, Ghosh and his team used electroencephalography (EEG) to record the response to mechanical touch on the thumb, index, and middle fingertips of touchscreen phone users and compared it against a group who did not use smartphones. The researchers found that electrical activity in the brains of smartphone users increased when all three fingertips were touched. Not only that, there was a direct correlation between the level of brain activity and the regularity and intensity of smartphone use.