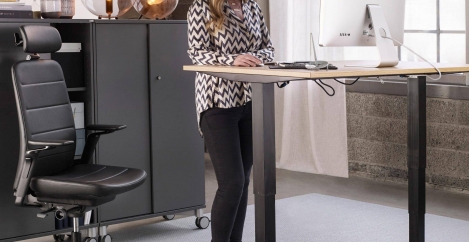 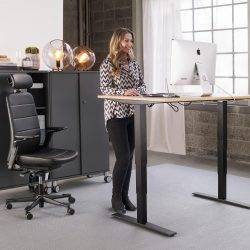 Before we begin, the usual disclaimer that sitting is definitely not the new smoking and standing to work for long periods is just as bad as sitting. Having said that, a new study published in the Journal Psychological Science carried out by researchers at Ariel University and Tel Aviv University suggests that standing to work may improve cognitive performance as well as physical wellbeing. The study of 50 students carried out by Yaniv Mama, David Rosenbaum and Daniel Algom found that the mild stress associated with the effort of standing up improved the ability of participants to cope with simple mental tasks.

The results are predicated on the idea that we are all multitasking all the time, because our brains are engaged in the process of controlling and monitoring our posture. The mental processes involved are more complex when we are standing than while sitting, which means that our brains are under slightly more stress when we stand to work. The authors cite a number of other papers to suggest that a moderate amount of stress improves our ability to carry out certain tasks, an idea they tested against the performance of people standing to work.

The test results suggest a significant correlation between posture and cognitive performance. However the authors also caution that some postures, including standing, can also divide attention if made too difficult and thus become a source of divided attention rather than a fairly simple dual tasking.

Participants were asked to take part in an activity known as the Stroop test, which asks them to state the printed colours of words which are themselves the names of colours. Sometimes the printed colour matches the word, and sometimes not. The response time of the participant is a measure of how quickly they are able to process information and can be affected by distractions and the imposition of other cognitive demands.

The researchers found that people who took the test while standing were up to a fifth faster than those who took it while sitting. They conclude this could suggest that standing to work improves performance and productivity but also that there is other research to suggest that the outcomes are still complex and unpredictable.