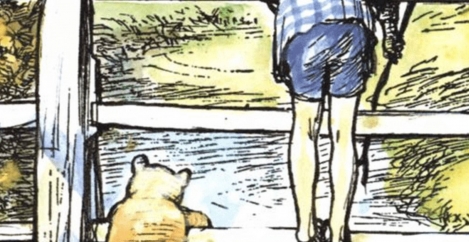 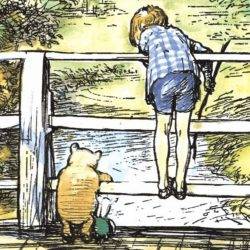 Toss a sliver of information into the great stream of accepted public narrative and see what happens to it. There it goes, briefly visible on the surface then consumed; part of the stream but no longer to be seen. A perfect example of this is provided by a recent piece of research carried out by the Texas A&M Health Science Center School of Public Health into the effects of standing at work on a small sample of call centre workers. While the results of the study are impressive, notably a 46 percent increase in productivity, by the time the story was reported on Inc.com, the 167 call centre workers had suddenly morphed into ‘everybody’. It should go without saying that the headline ‘Your Productivity Will Increase by 46 percent if You Stand at Your Desk’ does not reflect the conclusions of the original research. The statements by the researchers suggesting that the study is significant with regard to call centre staff but merely indicative of a wider issue go ignored.

What happened in reality is that the researchers examined the productivity differences between two groups of 167 call centre employees over the course of six months and found that those with sit-stand workstations were about 46 percent more productive than those with traditional, seated desks. Productivity was measured by how many successful calls workers completed per hour at work. Based on work related to this study in a previous publication, workers in the stand-capable desks sat for about 1.6 hours less per day than the seated desk workers. The study was published in the journal IIE Transactions on Occupational Ergonomics and Human Factors.

“We hope this work will show companies that although there might be some costs involved in providing stand-capable workstations, increased employee productivity over time will more than offset these initial expenses,” said Mark Benden, Ph.D., C.P.E., associate professor at the Texas A&M School of Public Health, director of the Texas A&M Ergonomics Center and member of the Center for Remote Health Technologies and Systems, and one of the authors of the study.

“One interesting result of the study is that the productivity differences between the stand-capable and seated groups were not as large during the first month,” said Gregory Garrett, M.A., a public health doctoral student and a lead author of the study. “Starting with the second month, we began to see larger increases in productivity with the stand-capable groups as they became habituated to their standing desks.”

In addition to helping the bottom line of the company, standing during the day can improve worker health. Nearly 75 percent of those working at stand-capable workstations experienced decreased body discomfort after using these desks for the six-month duration of the study.

“We believe that decreases in body discomfort may account for some of the productivity differences between the two groups,” Garrett said. “However, standing desks may have an impact on cognitive performance, which is the focus of some of our research going forward.” 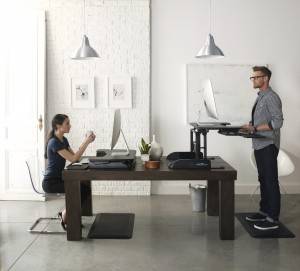 Benden cautioned that the research did not employ a random sample. All 74 employees with stand-capable workstations had been on the job for one to three months, while the 93 workers with more longevity–one year or more at the company–acted as the control group and remained seated throughout the day. “Still, we believe that the fact the new employees had at least one full month on the job, in addition to 60 days of training, before we began measuring, was more than enough to minimize ‘experience variation’ between the groups,” Benden said. “This design also eliminates volunteerism bias, which increases the generalizability of the study results.” In other words, the fact that employees were assigned a particular workstation, instead of being able to choose which one they preferred, means there wasn’t some underlying factor that made some people both more efficient and more likely to request a standing desk.

Far away from the sober optimism of this limited academic study, we find another report published at around the same time which is far more in touch with the current mood. The research into the working habits of 2,000 British staff carried out by insurers Westfield Health found that many are far too sedentary at work, don’t take enough breaks and would benefit from moving around more.

Of course, these perfectly reasonable findings aren’t good enough in the current climate and so a press release was issued to announce that ‘Sitting at our desk is as bad as smoking’, in spite of the fact that the study proves nothing of the sort.

Instead it found that over half of British workers (51 percent) do not get up from their desk at all during a working day, apart from going to the toilet, 60 percent spend most of their day sitting down and over half of us don’t even stretch our legs at lunchtime. It found that 55 percent of us walk for less than 20 minutes per day, with the worst culprits being those who work in Financial Services – 76 percent of whom admit to only getting up from their desk for less than one hour a day.

While 84 percent think it is important to take a proper lunch break, 62 percent of employees are too busy to take a lunch break, 55 percent eat lunch at their desk and 16 percent don’t eat lunch at all. Conversely the survey also claims that 64 percent are concerned about the health implications of a sedentary lifestyle, 40 percent say that they feel less stressed after walking in the fresh air for part of the day. 26 percent of UK workers say that they suffer from stiff joints and back ache having not been for a walk during their working day.

These findings are interesting enough in their own right. But we are now in the age of the narrative in which facts can get in the way or are too subtle, complex or undramatic to fit with headlines that support our biases and presuppositions. It’s perhaps not quite true that we are living in a post-truth world. But we are certainly living in one that is post nuance.