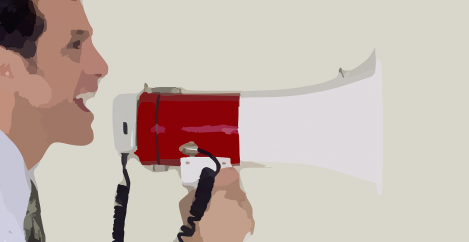 Republished: The brain-dead megaphone of work 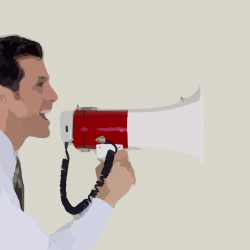 There is nothing new about any of this. And yet it’s all new. I’ve spent months talking to people who really know their stuff about work and workplaces and underlying nearly all of those conversations is the following paradox. They know about flexible working, the under-utilisation of space, the twenty minute neighbourhood, the work ecosystem, universal basic income, the digital workspace, the office as club, all the rest of it. Heard it all before, often many times, over many years. Some of them have been living it too, and yet…

The yet is where the real conversation lies. We have to ask what has changed in the way we consider ideas that have been around for many years and we thought we could hold on to.

The most obvious is that the existing conversation has been intruded on suddenly and noisily by the pandemic. There’s an essay by the writer George Saunders called The Brain Dead Megaphone. It begins with an anecdote about a party with guests who have ‘lived, suffered…have real areas of expertise’ and are conversing happily.’

In walks a guy with a megaphone and starts to dominate the room. ‘He’s not the smartest at the party, or the most experienced, or the most articulate. But he’s got that megaphone.’

Pretty soon the conversations degenerate. The guests stop what they had been doing and instead become reactors to the guy with the megaphone. His yammering restricts the language people use and so restricts their thoughts. ‘He has, in effect, put an intelligence-ceiling on the party.’

This could describe any number of modern discourses, and the essay, written in 2008, anticipates how the media now acts as the megaphone for people we’d be better off ignoring. Saunders was really talking about television, then America’s only mass media, but it’s now relevant to many other forms.

It’s been interesting to watch this kind of thing play out. We have witnessed the sudden influx to the party of people with powerful opinions about things they’d never considered before. Some have had interesting things to say. Some not so much.  My own personal tipping point was a Richard Littlejohn column, but then that serves me right for paying attention to it.

Then there’s the deadening hand of restricted language. This is most obvious in the phrase new normal, the use of which has long been banned on here, but it’s there too in the way established ideas have been rebadged as people have tried to claim them. Is hybrid working really any different from flexible working? Isn’t all the talk about people working closer to home just a reframing of the established idea of flex and core?

Often the views expressed by people are the projection of their own circumstances onto the rest of the population. If it’s good for me, it’s good for everybody. This solipsistic outlook is pulled apart by Dror Poleg here. Our own experience of something doesn’t tell us much about it. The same is true for the experiences of people like us. We need to look outside.

If something can be done more cheaply elsewhere, it will ultimately be done there

As Dror puts it: “High-income earners do not just make more money, they are also much more likely to be able to perform their job remotely. This makes intuitive sense, but a study by researchers from Oxford, Cambridge, and The University of Zurich points backs it up with data. The study points out that “workers’ ability to carry out their tasks from home” was an “important determinant” of how well they fared during COVID.”

This dynamic will inform what is to come. As I’ve suggested before many of the new proponents of remote work are ignoring what comes next. As Dror puts it:

“It’s not the employees who are going remote, it’s the jobs themselves. These positions might be filled by the people who previously filled them; they might also shift to someone else, somewhere else.

Looking at the history of manufacturing jobs makes it easier to grasp what’s coming. When, say, General Motors moved a factory job to China, this didn’t result in someone migrating from Michigan to the more affordable suburbs of Guangdong, China. The job moved, and the old employee stayed put.

… if something can be done more cheaply elsewhere, it will ultimately be done there. Many employees can move to a place that allows them to compete better (by lowering their cost of living), but many will stay in place due to considerations that have nothing to do with the job itself: family ties, the cost of moving, language barriers, visa and immigration restrictions.

White-collar jobs are different from blue-collar jobs. It is much easier for a non-manufacturing job to move online — it does not require massive investment in new factories and the reconfiguration of physical supply chains.”

This is the inevitable outcome when work is reduced to a primarily economic transaction, the sale of units of work for money. It is the trap that awaits. Even for those whose job does not move overseas or onto a freelance jobsite will find their choices narrowing.

I’ve come to the conclusion that this is the biggest factor in the ‘yet’ expressed by workplace experts. While for some people the new era promises to do much to improve their lives, careers and incomes, for many others the opposite is true. Work will become insecure, micromanaged, low paid and possibly non-existent.

A couple of years ago I wrote that the quest for wellbeing had taken over the quest for productivity. That is no longer true or may simply look naïve. Productivity is now what we talk about. And if we don’t tone that down and manage this properly we will see a rapid widening of the gaps between those who thrive in the new era and everybody else.