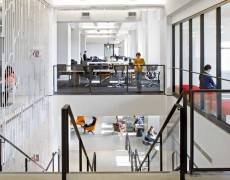 It may well be a statement of the obvious, but it’s worth reminding ourselves sometimes that the term facilities management consists of two words. There is often a bit too much emphasis on the facilities and a bit too little on the management and sometimes we look for design and product solutions to problems that would be better managed in some way. You can put this down to a number of things but to some extent at least it’s down the idea that when you are determined to use a hammer, every job looks like a nail. Obviously the media takes some of the blame for this mindset because it often earns income from businesses who want to sell their stuff to solve particular problems rather than focus on the idea that many of them can be addressed either as a management issue or in combination with products and design.

I don’t want to blame the media too much though because they are always an easy target, they’re just doing their job and everybody needs to share some responsibility for the imbalance. So when people in the workplace don’t turn off lights they don’t need or leave taps running, it’s attractive to think that the answers lie in specifying lighting controls, motion sensors and automatic shut-off taps. And you can see why these are attractive solutions. It’s because they take the human element out of the equation.

Not only does this approach make the solution idiot proof, in the best cases it can even make it bloody idiot proof, which is invariably far more difficult considering the propensity for people to find new and unforeseen ways to do really stupid things. It also means there is no tiresome need to actually sit down with people to make them aware of any problems, ask them to change their behaviour and if they don’t, work out ways to improve the situation. However, in practice, most people are perfectly happy to go along with management initiatives to save energy and cut costs if they understand the context of a policy and are communicated with effectively.

In fact we could go further and suggest that involving people in addressing such issues is not only a more effective solution than automation in some cases, but can actually engage people in the process, make them happier at work, encourage them to contribute better ideas than you might have and improve their relationship with the organisation.

With some issues the best solution is clearly based on good management rather than or as well as good design. For example, good ergonomics is only achievable when not only have you bought the right products, you have trained people to use and adjust them correctly and have advised them of the wider issues related to their own behaviour.

The emphasis on behaviour is why one of the best examples of good ergonomic practice is not related to offices at all. Schoolchildren never sit in one place for more than an hour at a time during the school day. The worst ergonomics they endure are usually to be found in the home and kids are far more likely to develop Xbox thumb in the lounge than a problem in the classroom.

While at school, they are rarely in one place for more than an hour, they are constantly moving around the building, changing the things they do, getting fresh air and daylight and taking regular exercise. That is why, although most kids are not generally trusted with chairs with wheels on (for good reasons)and most work while sitting on a four legged polyprop chair, their ergonomic practices are, on the whole, better than those of their parents at work.

I’m obviously not suggesting that the answer to good ergonomics is to sling out the Aerons and replace them with something a lot cheaper and marching people around the building every hour – although that would work. But there is a balance that we can have wrong at times. However good the product solution, it can be at least matched by a behavioural and hence a management response to whatever challenge we are trying to address. The best solutions will not only see an integration of good management and great design, but an intelligent interplay of the two.

The workplace should be designed for (and by) people, not robots UK workers are amongst least engaged in the world, claims new report