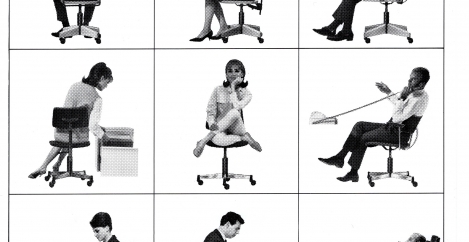 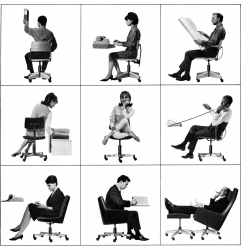 Although the invention of the swivel chair – and by extension ergonomic seating – is largely credited to Thomas Jefferson, the roots of its industrialisation and our modern approach to ergonomics lie in Europe. It was here nearly one hundred years ago that Albert Stoll first introduced the world to the Federdreh, the legendary chair that is the common ancestor of every task chair that has followed.

In 1871, a young engineer called Albert Stoll relocated to the town of Waldshut, on the southern fringe of the Black Forest on the banks of the Rhine which forms a border between Germany and Switzerland, to develop new processes of woodworking in the manufacture of seating. A year later he set up a second firm in Klingnau in Switzerland. By the 1890s, the focus of his work had shifted to office task seating, initially with the creation of a four-legged chair which incorporated a swivel and height adjustment mechanism based on a column with a threaded action.

His son, Albert Stoll II later assumed both his father’s mantle and pioneering spirit. He proclaimed that ‘the chair is becoming more and more important as a working tool” and began intuitively to develop his own ideas about what we would now call ergonomics, although this was long before the term was even coined.

In 1926, at a trade show in Leipzig, he unveiled his core ideas to the public for the first time. The product he showcased, the patented Federdreh mechanism with its rotating central column and adjustable backrest is now rightly regarded as the progenitor of all modern office seating.

Of course, this wasn’t the end of the story. Three of his four sons went on to play an instrumental role in the creation of the modern office furniture industry and its focus on ergonomic seating. This was also a move that was to reshape thinking across every continent. Albert Stoll III took control of the Swiss arm of the business, which was to become Giroflex based in Koblenz.

Meanwhile Christof and Martin Stoll took joint responsibility for the Waldshut based business, until it was split up in 1958. Christof took over the reins at the existing site, developing the newly formed Sedus brand. Sedus is still going strong in its original location. Meanwhile Giroflex, is now a brand reinvigorated following its acquisition by European giant Flokk in 2017.

A seminar and exhibition at the recent Clerkenwell Open explored the 150 year history of Giroflex as one of the most iconic and ground-breaking office furniture firms in the world. Its designs are now distinctly modern, but the values they espouse are consistent. This is perhaps unsurprising given that while the materials and processes we use to create seating move on, the bodies and needs of the humans that sit on them are unchanged.