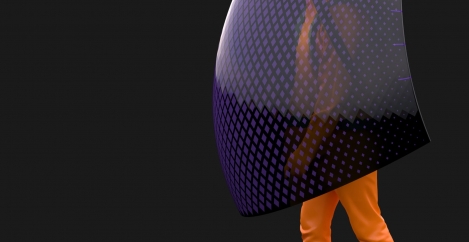 Will coronavirus mean the death of the office? 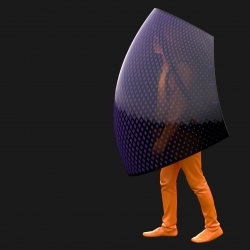 Betteridge’s law of headlines declares that “Any headline that ends in a question mark can be answered by the word no”. And so I simultaneously ask and answer the question of whether the coronavirus pandemic will really lead to the death of the office. So it goes. Of course, I’m not the first person to raise the question over the last few weeks as the world adapts to the threat of the pandemic. But it’s worth reminding ourselves that the demise of the office has been predicted for at least a quarter of a century, although never in such circumstances.

You can see it asked unironically here and here. Meanwhile, we are told that other things that may be dying include the handshake and, inevitably, the open plan which always has to find its way into any workplace conversation in the mainstream media and how predictable for us to see the Wall Street Journal lazily retaking the tedious, old, well-travelled road.

Whatever the context, the question posed about the end of offices is inherently stupid. It is based on a faulty premise which sees the time and location of work as a zero-sum game. So, the answer to the various miseries (and currently risks) of commuting and office life is – we are told – to work from home. And if we can’t do that, maybe we should walk around in the cocoons developed by architect Sun Dayong (main image).

Working from home may be a temporary answer to a very specific and serious problem, but ultimately things are inevitably a bit more complex than everybody working all day at the kitchen table after downloading a Zoom app on their desktop and imposing new rules on themselves and a noisy household.

As this piece in the FT argues, heaven cannot be found by working in the home. Or at least not for a lot of people. For them, that merely means swapping out one routine and one set of distractions for another. A fact that is inspiring a tsunami of articles offering advice to people who suddenly find themselves cocooned in a way they may once have though would solve the problems of their daily grind.

Away from the practicalities of working from home, there is also a great deal of evidence to suggest that we are not ready for a new era of home working, either culturally or in terms of infrastructure.

The shock to the system

So the long term effects of the shock of the pandemic are likely to involve the continuation of an existing trend towards more agile forms of work that involve both traditional albeit smaller offices and other times and places, but one accelerated by the realities of our current situation. Andrew Mawson explores the long history of this trend here and you can see my own thoughts about the shift from survival to enquiry and ultimately sophistication here. Don’t panic.

As a consequence and as this analysis suggests, the office market is likely to see no major long term shift in demand. I mostly agree but what it may see is a structural change as we fit physical offices into more abstract ideas about the workplace. This is yet another existing trend that may be charged up by the current crisis.

The changes in this new conception of space and time should be primarily cultural, and the major challenge will be to cut back on the amount of media time and column inches devoted to technology and physical design and make the case for cultural change as the primary catalyst of a new way of working.

In particular we need to escape the trap of thinking that salvation lies in a breakout space or digital meeting. That is a partial cop out by businesses who would benefit far more from changing the relationship people have with work and workplaces.

Don’t just give people the technology and hope that sorts things. We already know that doesn’t work. As this article in The Atlantic points out, the laptop is just as much an instrument of enslavement as the 9 to 5. So, hold me Mom, in your long arms, in your automatic arms, your electronic arms.

Instead of liberating white-collar and “knowledge” workers from their office, laptops turned many people’s whole life into an office. Smartphones might require you to read an after-hours email or check in on the office-communication platform Slack before you started your commute, but portable computers gave workers 24-hour access to the sophisticated, expensive applications—Salesforce CRM, Oracle ERP, Adobe Photoshop—that made their full range of duties possible.

A sense of distance

Working from home also distances people from each other and whatever shared goals they have. Nothing propinks like propinquity, and Mark Catchlove offers this timely reminder of just how important our various interactions with others are. 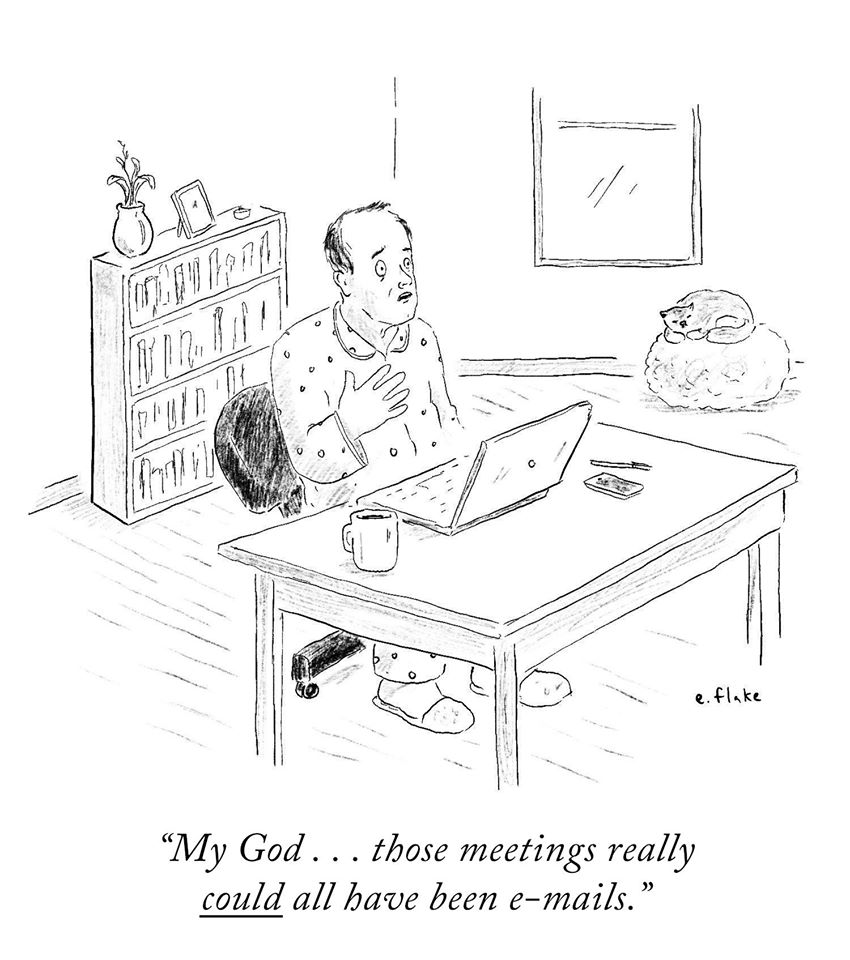 You may also have seen this cartoon in The New Yorker on social media. At the risk of being a tired old grump and bore – and when have I ever worried about that? – the evidence doesn’t back this up, however compelling it might seem. A recent study published in the Journal of Organisational Psychology and referred to here, found that meetings are a far more effective way of communicating with other people than emails.

Such insights and the underlying need to share space with other people are not just important in terms of their practical impact on our ability to work effectively but have profound implications for our wellbeing.

As well as structuring our time and identity, work opens us up to other people. And if the toxic nature of Twitter conversations and the hoarding of toilet rolls teach us anything it should be that we need to spend more time thinking about our responsibilities to others.

So it’s timely to see a study from the University of Queensland which highlights the massive benefits of relationships and daily interactions which underlines our need for physical as well as technological connections.

Loneliness and isolation are linked to poor physical and mental health. Studies have found that social disconnection poses a greater health threat than smoking, poor diet and lack of exercise. In addition to being a factor in the development of mental health conditions such as depression, psychosis, and social anxiety, loneliness increases the risk of premature death by around 30 per cent.

And one more thing

The crisis has most obviously exposed the faultlines in the understanding politicians have of people’s lives and what work consists of in the 21st Century. We can all welcome the government’s announcement of help for businesses but underlying it all, including the ever changing ‘advice’ the UK government offers is a very obvious ignorance or indifference.

This is a non-partisan rant because I would have little faith in a Labour government doing any better. The party’s pre-election manifesto was shot through with a commitment to fighting a 19th Century battle using 1960s weaponry and anything that fell outside of this worldview had to be ignored. This included the shadow chancellor ignoring a report he had commissioned himself which found that the idea of a four day week was irrelevant or unwise for a large proportion of the UK workforce.

So, when this whole sorry mess is over, my two wishes are that we adopt a better working culture for everybody and that legislators wake up to the realities of the lives of the people they govern and the complexities of modern work.

In the meantime, I wish you and your friends, colleagues and loved ones all the very best.

Routine admin tasks hamper collaborative work How important is it to be happy at work?