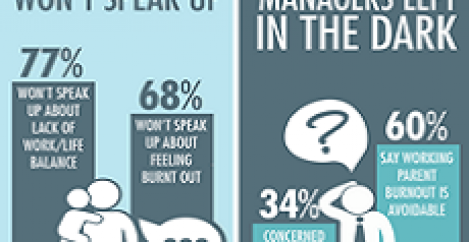 Working parents suffer in silence, as managers kept in the dark 0 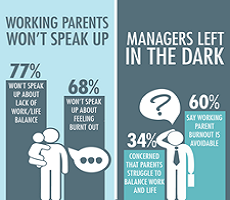 The survey found that around 8-in-10 working parents (79 percent) and managers (77 percent) agree a change needs to be made at the office, not at home, to curb burnout. Three quarters (75 percent) of working parents say they are unlikely to speak up about their employer being insensitive to their needs as caregivers and 77 percent would avoid airing a grievance about not having work-life balance. Well over half (61 percent) don’t feel supported by their employer when it comes to attending a child’s event, like a performance or game As a result of this silent suffering, managers just don’t see the magnitude of the problem. When asked if they were concerned about working parents. Barely a third (34 percent) of managers have concerns that working parents struggle to balance work and life and less than a third of managers (30 percent) worry about whether the working parents they supervise feel their company doesn’t care about them. 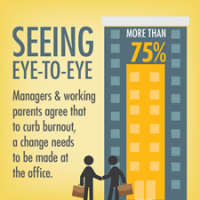 This year’s study continues to show the increasing value dads place on family time and that being there for their children and family more often supersedes their responsibilities to financially support them. Yet results show that managers seem stuck with the outdated notion of gender roles and fail to understand that work-family balance is no longer just an issue for mothers: 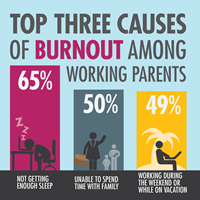 Providing solutions for working parents could help managers retain these employees that they clearly see as valuable. When asked in which areas working parents were stronger than their non-parent counterparts:

And with the right supports, working parents could be even more valuable to their employers with increased capacity to be more creative and creative problem solvers. Both working parents (35 percent) and managers (49 percent) agree that having better work-life balance is the number one factor that would help them to be more creative at work. For both groups, improved work-life balance was more popular than working with other people who are creative, having a manager who gives them “free reign” and taking more time off.

“We work with hundreds of employers who are tuned into the challenges faced by working families and who recognize that these employees are also among their most valuable. All employers must consistently look for new ways to ensure that the culture they are cultivating is one that resonates with and is valued by their employees,” said Bright Horizons® CEO David Lissy.