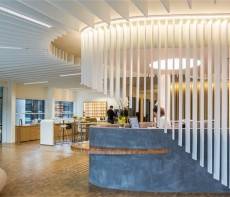 What is claimed to be the world’s most energy efficient office building has been opened in Norway. Powerhouse Kjørbo in Oslo is Norway’s first energy-positive building and the, according to its developers, the first in the world to be retro-fitted to produce more energy than it consumes. The building is part of the Powerhouse project, a collaboration between a range of organisations with an interest in developing and promoting energy efficient office buildings.  The Powerhouse consortium defines an energy-positive building as any building which generates more clean and renewable energy in its operational phase than was used in its construction and lifetime, including materials, operation and disposal.

The partners in the Powerhouse project include the real estate company Entra Eiendom, construction company Skanska, the environmental organization ZERO, Snøhetta archtects, the consulting firm Asplan Viak (who now occupy the building), the aluminium company Hydro, and the aluminium solutions company Sapa with support from The Research Center on Zero Emission Buildings (ZEB) and the Norwegian state-owned Enova enterprise.

The building was officially opened by Norwegian Minister of Trade and Industry Monica Mæland who said: ‘Buildings account for 40 percent of energy consumption in Norway and in the rest of the world. Powerhouse Kjørbo has been designed to generate more energy than it uses, and thereby represents a large and important breakthrough in efforts to reduce energy consumption and climate gas emissions. It is wonderful to see private industry taking the lead in this way.’

During the course of its anticipated life expectancy of 60 years, it is claimed that Powerhouse Kjørbo will generate enough energy to cover the total amount of energy used to produce, operate and dispose of the building. The energy efficient office building uses geothermal energy for heating and incorporates Norway’s largest array of photovoltaic roofing to achieve this. Powerhouse Kjørbo involved a renovation of two 2,600 sq. m. (27,986 sq ft) buildings. 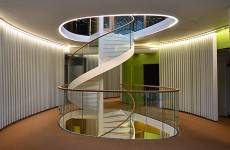 The combined annual energy consumption prior to the renovation was 650,000 kWh. With the completion of the project, the energy requirements of the buildings are expected to be reduced to around 100,000 kWh per year. The solar panels will generate more than 200,000 kWh annually, with any excess energy being supplied to the power grid.

‘As far as we know, this is the first building in the world that has been renovated into an energy-positive structure. It is the unique collaboration we have had from the very start that has made this possible,” says Ståle Rød, chairman of the Powerhouse consortium and CEO of Skanska Norway.

Workplace design, Facebook likes and the need of companies to be your friend Using a mobile phone while driving is now commonplace for UK managers, claims survey