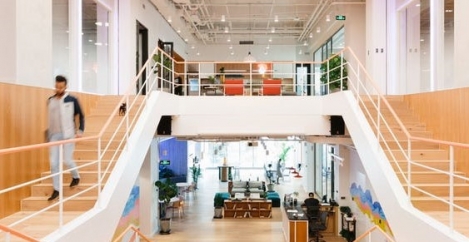 Back to workplace basics, the joy and pain of work, squeezing people in and some other stuff 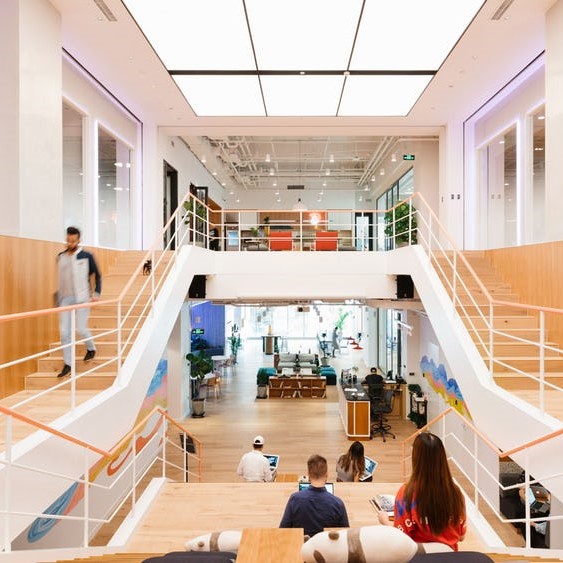 Let’s get the inevitable WeWork story out of the way first. A supposed news item in Crain’s New York Business has claimed that WeWork is ‘squeezing’ people into half the space recommended in the BCO’s Specification Guide; “roughly the size of two standard doors laying side by side”. You can see the editorial cogs at work here, combining a story about WeWork with one about how people are crammed into the workplace like cattle these days.

But this misses the obvious point that people are no longer expected to sit at a desk all day and WeWork serves the people in the offices in the same way a shop serves customers or a church does the faithful. It’s about footfall, not footprint, a shift from order to (managed) disorder and it shouldn’t need to be pointed out to a prestigious business publication of this kind.

As WeWork itself points out in this piece on Activity Based Working, this is what people want, or seem to want and companies need to make their own cultural shift to accommodate. This doesn’t necessarily involve a slide and a ping pong table in the workplace but does mean offering people things like freedom to choose, personal development and a better experience of work. Who knew?

The basic truth about wellbeing

Well, Jeanne C Meister knows for one, as she reports in this feature in Harvard Business Review. In it she finds the evidence to highlight the frequent pointlessness of wellness perks that are enjoyed by a minority such as gyms in favour of more basic workplace factors that benefit everybody such as fresh air, daylight and control over their immediate workspace.

Another is Derek Clements-Croome who explores several facets of this approach in his new Flourish Model, summarised here.

Our expectations of our workplaces are ever-changing, and this requires a change in the way we design the workplace. Although, traditionally, the cost of occupancy per square metre was the valuation metric, organisations have now realised that employee wellbeing and productivity plays a much more important role in what is considered economic value for money. Therefore, there is now a growing demand for indoor environments that can support health, wellbeing and productivity.

Anne-Marie Rattray explores the consequences of poor work culture, hierarchy and the potentially fatal consequences in this piece on LinkedIn, with a personal account which I hope she doesn’t mind me sharing.

My dad died aged 45 of a heart attack. He worked on the factory floor in IBM, Greenock. He was a first-line supervisor, kicked from the top down and from the bottom up. He died two years after I had left home to work in London at the age of 18. One of my sisters told me that his hands used to tremble on a Sunday evening as he anticipated work the following day.

I used to hate IBM. I really did but that was until I realised that my dad’s death was linked to a wider trend of poverty and mortality. I stumbled on the work of Professor Sir Michael Marmot about fifteen years ago. In this article from 2006, Health in an unequal world: social circumstances, biology and disease, he says that: “The unnecessary disease and suffering of the disadvantaged, whether in poor countries or rich, is a result of the way we organise our affairs in society.”

How many of your friends or co-workers have actually quit their jobs to go live in igloos or become globe-trotting nomads?

A different take on the potentially toxic but otherwise complex and sometimes (often?) rewarding relationship we have with work and its interweaving with the rest of our lives can be found in this piece by Sten Sootla. His relationship with his parents and their work is also a theme but so too is the drive to endure and overcome drudgery and find love and meaning. One interesting point he raises is the common but often unattainable dream of stopping work completely.

Look around you (in real life, I mean, not on social media). How many of your friends or co-workers have actually quit their jobs to go live in igloos or become globe-trotting nomads? I thought so.

These are millennial dreams to be sure, the generation that suffers most from banal stereotypes. The related notions of the multitasker and the digital native are comprehensively dismantled in this paper, brought to my attention by the incomparable Rob Briner.

The universal truth is that we are all in pursuit of and need of good work and a good workplace. The RSA has been instrumental in driving the conversation about this, in the UK at least and so they continue to talk about it in their research and in features such as this by Matthew Taylor and Fabian Wallace-Stephens. This sets out potential futures for work while acknowledging that while people are changing to meet the needs of a new world of work, they shouldn’t be allowed to hit the ground when they fall, as they inevitably will.

This in turn will require the government to wake up to the changing nature of work and embrace it as much as workers will have to. Companies too must develop a new relationship with both the world in general and their workers in particular, and they must do it soon, according to this piece in The Economist.

The shift is … part of an upheaval in attitudes towards business happening on both sides of the Atlantic. Younger staff want to work for firms that take a stand on the moral and political questions of the day.

Maybe this is one millennial stereotype we should live with. It benefits us all.