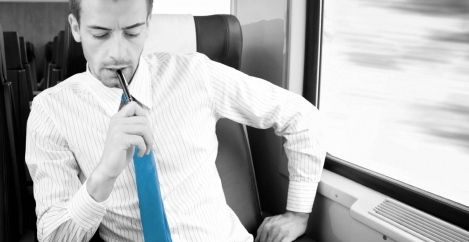 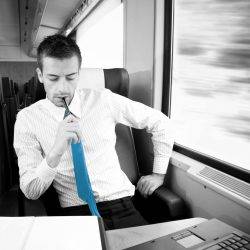 A fresh look at the time spent commuting might just bring a new flush of productivity to the workplace as well as create happier staff which could reduce churn, sick days and all sorts of negative behaviour. Whether its public transport or a car commute many of the negative feelings are the same and they do not help the business.

Where Do You Start? Let It Flow

There is no doubt, commuting is largely a negative experience, be it on public transport or car. There is a fair amount of evidence to suggest self-powered commuting can actually improve well-being but most people are not close enough to cycle or walk to work. The reason people don’t like commuting may be down to the length of time it takes, the effort, the crowded trains or the traffic jams but all of these things would cease to be such an issue if the employees mind was stimulated. Flow is a term given to the state of mind we achieve when we are fully immersed in the task we are engaged in. This is something everyone has felt from childhood days to a happy conversation with a friend. The best way to think of it is the old adage; time flies when you are having fun. Mihaly Csikszentmihalyi the Hungarian psychologist actually did a recent TED talk on the subject of flow being the secret to happiness. So adding some flow into the commuting mix is the first step to changing the perception of it.

Finding things for people to do on their commute is too simplistic an approach. Each employee should be encouraged to think of what they might want to engage in on their own journey to make the time pass quickly and constructively. After all, one man’s pleasure etc etc, for many people the idea of a motivational TED video on their ipad would be enough to make them quit there and then but for others it could well be the best start to the day they could think of. As part of the process of getting staff to think of their own ways to achieve flow it may or may not be prudent to suggest work related tasks. For some train commuters starting the working day on a lap top is the norm but does this approach leave them feeling positive when they arrive at the office or just even more tired?

Try considering audio books and self-development programmes and e learning.  Stimulating the brain in a positive way will yield benefits in a work force so even if it means an accountant is learning Spanish on the way to work it doesn’t matter. The aim is to create a time and space in the day that is positive and then let that positivity spread into the working day.

Some forms of “entertainment” are simply not viable, for example, watching videos when driving is not only stupid it is illegal and highly dangerous. Also, in some cases people might be shy about watching videos on a train with prying eyes naturally being drawn to any screen they see. However audio books and the like can offer the perfect alternative. Apps like Audible offer a huge range of books to listen to and once again, just because the book is not work related doesn’t mean it won’t benefit the employee and the business as a result. Getting caught up in a gripping novel and ignoring the traffic jam might just make the person look forward to heading to work in the morning rather than dreading it. This means they will arrive feeling far more positive.

Once this new way of viewing the commute starts to take hold employees should be encouraged to share their experiences with other members of staff. Some may be struggling to find a suitable doorway to the elusive flow and a simple recommendation from another member of the team might offer something new. Managers should lead from the front on this too, openly discussing audio books or educational pod casts will help spread the good word among the team. The temptation for managers to only ever promote hardcore business learning should be avoided, they should be brave enough say they are listening to Harry Potter and give the staff a chance to find their own way.

The simple goal of this process is to remove some of the misery related to commuting and bring some enjoyment into a space otherwise used as a reason to moan. By engaging the brain in work or non work related stimulation the commute itself should pass faster, feel shorter and lead to less of a negative impact. Whilst companies cannot reduce the travelling time and get people home to see their kids any earlier they can and should be trying to help make the journey more stimulating,