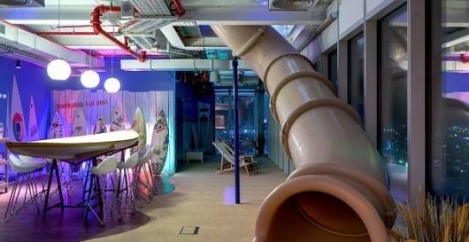 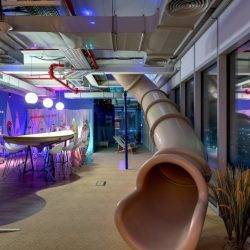 The majority (79 percent) of workers say reliable and modern technology is more important to them than office aesthetics, while accessories such as ping pong tables, slides, hammocks and wacky office designs may look good in pictures, but they don’t necessarily make employees any happier or productive. The is according to a survey, conducted by storage firm Kiwi Movers, which found that 86 percent of UK adults who work in an office said fun features were of no specific value to their working life, 11 percent said they were nice-to-have and of some value and 3 percent said they were very valuable. The most popular office perks are those offer an immediate tangible benefit to the employee, but even so, as many as 23 percent don’t take advantage every day; while 71 percent overall said they’d like more space in their office and of those, 58 percent believe that could be achieved by removing non-essential items. The research also found that younger workers were more likely on average to take advantage of ‘environmental’ perks like chill out areas and recreational equipment.

“Businesses often confuse perks with culture. Providing recreational spaces and a fun environment are not the same as establishing a positive culture that makes employees happy, improves retention rates and increases output. There’s a growing trend for businesses to promote their superficial perks, such as welcome packs, free breakfast and ‘fun’ office spaces as if it’s a sign of a positive culture, but it really isn’t. Cool furniture is nothing more than a nice-to-have bonus and businesses should be wary of focusing on it at the expense of genuine culture.

“Anyone can order a few hammocks and beanbags from Amazon, but it takes years of hard work, research and commitment to values to establish a meaningful workplace culture.”

The Kiwi Movers team were prompted to conduct the study after noting an increase in companies moving non-essential office items into storage.

Kiwi Movers director Regan McMillan said: “We’re in an out of offices around London and the UK every week, so we see a lot of different styles. There are some genuinely cool offices that are well designed and thought through, but others appear to be more haphazard and self-conscious.

“Business owners are often very surprised by how much space they can reclaim by getting rid of unused features. Over the past 12 months we’ve certainly noticed a rise in businesses putting non-essential furniture into storage, even when moving to larger premises, which prompted us to look deeper into this trend.”

Most Bizarre and Pointless Office Features

Study participants were invited to list the unusual features in their current or previous offices that they found offered no value. Among the most unusual were: