Nearly all executives (96 percent) agree that primarily remote workers are disadvantaged compared to those who work primarily in the office, according to a poll of 200 executives at large US firms, commissioned by Vyopta. However, 92 percent of respondents also believe employees who are less engaged, either frequently on mute or don’t turn on their camera during remote meetings, probably don’t have a long-term future at their company.

Executives view the lack of employee engagement as a sign of subpar performance to come: 93 percent of executives say employees who turn their camera off are generally less engaged in their work overall. Notably, more than 2 in 5 (44 percent) strongly agree with this.

The lack of engagement opens the door to executives making assumptions about employee behaviour. More than 2 in 5 executives (43 percent) suspect that employees who are on mute or off-camera entirely are browsing the internet or social media, texting or chatting (40 percent).

Interestingly, many executives admit their company is not doing a good job of facilitating engagement. In fact, nearly half of U.S. executives (46 percent) say they are not providing the tools to allow their workers to be as engaged as their in-person counterparts.

The executives say the responsibility lies at the very top. About half of executives (49 percent) say C-level executives bear the greatest responsibility for increasing employee engagement at their company, followed by HR (28 percent), and division leaders (10 percent).

Maintaining employee engagement is a challenge all companies face in the post-pandemic work environment. Nearly all executives (99 percent) acknowledge there is room for improvement, with nearly half (47 percent) saying there is “a lot” of room.

The rapid transition from in-person collaboration has not been without its issues. An overwhelming majority (93 percent) of executives agree the frustration of working remotely is causing some employees to be less engaged on virtual calls.

The tendency to compensate by resorting to an abundance of virtual meetings may be taking its toll. Nearly half of executives (48 percent) cite too many meetings as a reason why employees do not talk during virtual meetings, saying they had too many calls that could’ve been an email. Nearly as many (47 percent) say not speaking up is a habit that has developed among their junior staff. 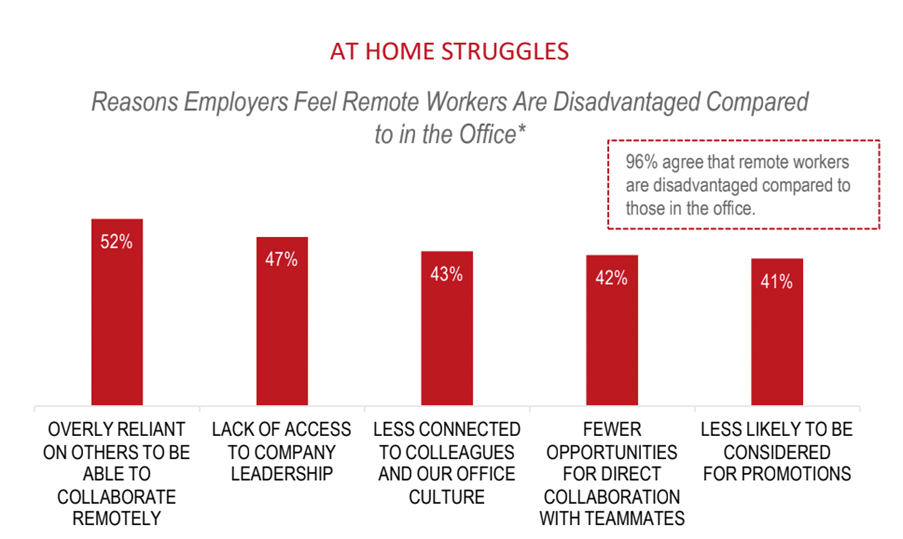 More than ever, primarily remote workers need to be able to depend on their professional lifeline. Nearly all executives (96 percent) agree that primarily remote workers are disadvantaged compared to those who work primarily in the office. An overwhelming 94 percent say remote employees were less connected and have fewer opportunities within the company than their office-working counterparts.

Executives point to collaboration challenges as the reason primarily remote employees are less engaged. The top issues are over-reliance on others to be collaborative (52 percent), lack of access to company leadership (47 percent), and less connected to colleagues and their office culture (43 percent).

Nearly all (97 percent) executives see the lack of engagement in a virtual environment as bad for business across the board. The most frequently cited negative consequences are slower skill development among employees (46 percent), lack of collaboration across teams (42 percent), and errors or mistakes slipping through due to a lack of virtual engagement (40 percent).

Even with the proper tools in place, minimizing user error must be a priority for companies. Executives cited an average of a third (34 percent) of all errors on virtual calls were because of a user issue as opposed to a technical issue. Based on their experiences, many report user error as an even bigger problem. More than 2 in 5 (43 percent) believe users are responsible for 25 percent-49 percent of all errors they encountered. Further, nearly a quarter (23 percent) said user error makes up 50 percent or more of these cases.

Given the increased importance of collaboration, companies are constantly challenged to keep everybody on the same page. All companies (100 percent) have taken steps to encourage greater collaboration between primarily remote employees and their in-person counterparts since the start of the pandemic. 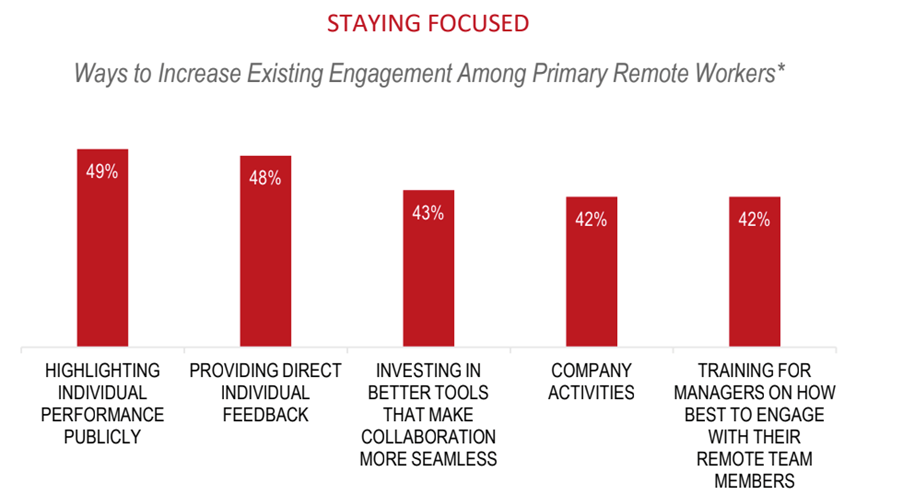 Technology is essential for the push to promote greater collaboration. Most (54 percent) say their company established channels on messaging apps such as Slack or Teams to encourage further collaboration between colleagues. Half (50 percent) required more participation on virtual calls/meetings and another 50 percent instituted formal training on remote collaboration.

Increasing engagement may require a multi-pronged approach. The top three strategies for increasing engagement are: highlighting an individual’s performance publicly, such as through awards or promotions (49 percent), providing direct individual feedback (48 percent), and investing in tools that make collaboration more seamless (43 percent).

With plenty of work ahead to improve engagement, companies are going to continue to rely on technology to bridge the gap. According to the poll, 92 percent of executives say it’s extremely or very likely that their company will invest in technical solutions to increase engagement.