How ingrained assumptions about the workplace are eroding 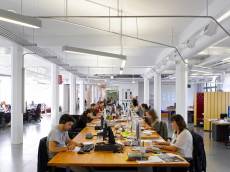 The first day at a new job used to mean getting the answer to that all important question: “so which is my office?”  In today’s mostly open plan environments, the same psychological attachment has been transferred to the desk – ‘my’ desk. However the current trend for flexible approaches to where people work means that even the concept of having one’s own desk is now under attack. So how much does having your own desk matter to the UK office workforce these days? We have been asking employees how they feel about having their own desk. The results seem to be that more than half, on average 56% (of a total of 2,653 employees surveyed at 5 recent client projects), think that it is ‘very important’ and a further 25% think it is ‘quite important’.

Yet we, like others are seemingly flying in the face of what the majority of employees currently think and are designing much more flexible workspaces, where people do not necessarily have their own desk and instead have a range and diversity of different spaces within the building at their disposal, depending on the task at hand. In fact, when we ask those same employees whether they would be likely to use a range of facilities to work from if they were available, 58% say yes they would be very or quite likely to. People seem to want have their cake and eat it.

And when organisations are interested in fostering greater collaboration, then a flexible rather than a static approach to workplace design can be part of the answer.  What of course this means is that people are no longer sitting at their own desks for so much of the day, if indeed they have a desk at all; they are, amongst other things, spending a lot more time moving about.  Our research shows this effect very clearly: on average pre-design intervention we have found only 1 in 17 people are walking about in the office space at any given time, whereas in the post occupancy studies we’ve conducted, that average increases to 1 in 10. A static environment becomes more dynamic, people are more likely to encounter their colleagues and in an unplanned way.

So what does this say for the future of your own desk? Well change takes time. Many people will insist they still need their desk.  And they may still get it, maybe a smaller one, in a more intelligent layout, where people in teams that are already working flexibly may share desks and use alternative workpoints at a long bench or in quieter areas that actually suit their job better than the traditional open plan ‘desk’.  Plus they get communal spaces where people can meet and talk to each other more easily. Sometimes a re-design is an opportunity for people to realise how little they actually use their desk and to softly change ingrained assumptions.  It may in fact work out better for them as well as for the business.

Ros Pomeroy is head of research at Spacelab. She has more than 20 years’ experience working with businesses to manage change effectively as well as a Masters in Advanced Architectural Studies from Bartlett School, UCL.  Originally an engineer, she ran her own change management and communications consultancy and worked as Head of Organisation and Change Management at T-Mobile International. https://www.spacelab.co.uk