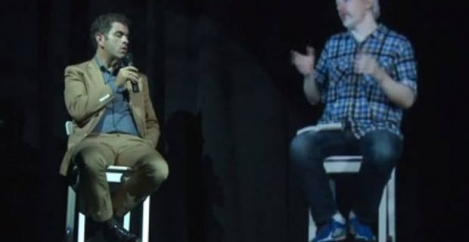 We have grown accustomed to the way technology distorts time and space. This, after all, is the underlying tension that defines each of the major debates about the workplace, including flexible working, office design, facilities management and the acquisition of commercial property. But, as they say, we ain’t seen nothing yet as the next generation of technologies starts to scale the upslope of the diffusion of innovation curve. People have been talking about telepresence for a little while, but it is about to achieve mainstream awareness thanks to events such as the appearance of Wikileaks Founder Julian Assange at a conference in the USA last week. Assange is famously holed up in London in the Ecuadorian Embassy, challenging his extradition to Sweden to face trial and can’t leave the building without being arrested. So the way he appeared at the conference in Nantucket was as a hologram.

He took part in an interview as part of The Nantucket Project, billed as a festival of ideas that attracts some of the most influential thinkers in US public life. He was interviewed by filmmaker Eugene Jarecki  who pondered whether this was technically illegal. “It crosses my mind,” he wrote in a feature in The Guardian, “I may be abetting a crime or violating international extradition laws. But I reassure myself that, in this regard, the worldwide web remains a kind of wild Wild West, and the virtual escape of a person is not (yet?) a crime.”

This is an extreme example of the way the virtual and physical worlds are increasingly rubbing up against each other, but does point one of the issues that lie ahead. As ever, the common application of telepresence as a tool in the workplace will offer opportunities and raise challengers for managers and legislators. We may not know what the outcome of this kind of technology may be, given its disruptive potential, but we need to leave ourselves options to take advantage of it and deal with the questions it asks of us.