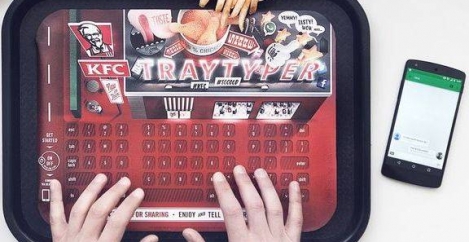 KFC Germany introduces keyboard paper tray (for a while) 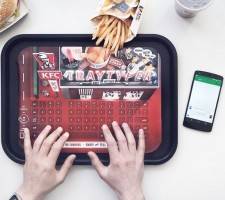 Ever worry that the five minutes it takes to eat fast food is not only depriving you of nutrients but also the chance to stay online – unless you really don’t mind greasy fingerprints all over your smartphone? Maybe not, but it’s clearly a problem for some people which is why a German advertising and design agency has developed a Bluetooth enabled keyboard tray for KFC which allows customers to eat fatty food without the intrusion of inconveniences such as napkins, awareness of the physical world, their own thoughts and interactions with other people. The agency Gute Werbung and a tech firm called Serviceplan have helped the fast food chain to introduce the Tray Typer as part of a promotion. The device consists of a tray liner with a 0.4 mm thick keyboard, rechargeable battery and a Bluetooth chip.

The promotion involved the provision of the trees for a limited period at a number of German KFC branches. According to Gute Werbung says that the trays proved a big hit on social media and that all of them were taken home after use by customers.