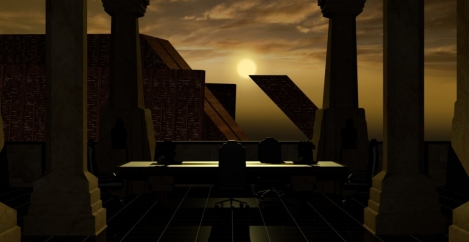 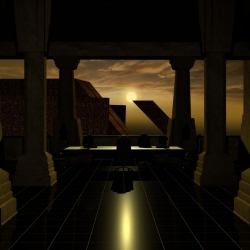 When Donald Trump was pictured recently sitting uncomfortably at a table that looked like it had been retrieved from a skip, it provoked the sort of sneering commentary about furniture choices last seen when Dominic Cummings popped in to the Downing Street garden to deliver some self-serving blather from behind a rickety trestle table.

Both men are routinely described as megalomaniacal and Machiavellian of course, so you would expect a Guardian columnist to sneer. But their choice of crappy, low status furniture doesn’t align with my idea of the right trappings for those sorts of individuals either. I want unpleasantly egotistical windbags to make their characters apparent in their surroundings. At the very least they should seek to humiliate their underlings with farting, low-slung chairs as CJ does Reggie Perrin.

For those with higher aspirations than bullying the middle managers at Sunshine Desserts, I envisage something a bit special. I expect Bond villains to sit at a £25,000 Bodil Kjaer desk. I want their office to look like Tyrell’s from Blade Runner (main image). If the next generation of political chancers and schemers want to live up to their image, they really need to work on their furniture game.

There is a widespread and growing realisation that many of the initial narratives from this year about remote work were overly simplistic. Not only because of how people have dealt with it based on their jobs, personality and circumstances but also about the effects of having to do it long term. Those are becoming more clear each day.

People are not just disconnected from each other but from the structures that help them to understand their place in the world. Like Billy Pilgrim, they are lost in time. Perhaps this one reason why they are working longer hours.

We need theories about being human and, more precisely, being human with technology – theories that can guide us in designing better technologies and their use

The mental health consequences of this dislocation can be truly dreadful. This feature from the BBC describes the effects of lockdown for some people as a ‘slow starvation of the senses’ and chronicles their struggles and how they have been able to overcome them. Even the technology we use to communicate with each other can serve to disconnect us from important ways, as this excellent piece from Nigel Warburton describes.

“How do we improve things? How do we re-humanise videoconferencing and other essential technologies? The tech industry’s answer is to add more features. But that’s not sufficient, and most often makes things worse. To start with, we need theories about being human and, more precisely, being human with technology – theories that can guide us in designing better technologies and their use. This is nothing new. The philosopher Martin Heidegger redefined being human as ‘being there’, amid the cultural, material and technical complex through which we make ourselves and are made by the world. He turned philosophy’s attention towards mundane tools, materials and practices: hammers, nails, wood. Basic tech. This is the ‘equipmental totality’ through which our projects are materialised, and which brings meaning to our lives.”

We won’t be able to gauge the consequences of the mental health crisis until we return to some sort of economic and social certainty. I’ve often heard the events of this year described as an experiment into the way work. If so, the results aren’t in, whatever you might have heard. Some of the recent research into the psychological effects of the crisis have been collated by the British Psychological Society, which you can read here. As Nigel Warburton suggests, we won’t improve things just by adding new features to the technology. We have to address the humans too.

Is there a future for the office? IWFM announces new framework for delivering social value