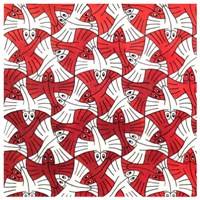 Our ability to recognise patterns is hardwired. We instinctively and often unconsciously look for patterns everywhere. Where none exist we often impose them, grouping things  together according to their colour, shape, texture, number, taste, smell, touch or function. We do this to make sense of the world and to understand what goes on around us. And conversely, the patterns we perceive influence the way we think and how we feel. It was the psychologist Carl Jung who first explained how the innate human ability to recognise patterns is rooted in the need for primitive humans to perceive patterns in the world around them as a way of identifying threats.

Jung saw the collective unconscious as a bank of shared primordial images, hardwired into us by our evolutionary past and leaving us with residual predispositions not only to look for patterns but to respond to stimuli in specific ways.

This behaviour is apparent from birth. According to research from the psychologist Alison Gopnik, babies as young as one day old will stare intently at bold stripes and other patterns for long periods, especially those with distinct lines and shapes and with strong contrasts between tones and colours. According to Gopnik these are the first clues most babies have that the world consists of discrete objects. Babies also respond instinctively to the patterns of features on a human face as well as the rhythms of baby talk from adults. By the age of one those patterns will have coalesced in the mouth of the child into the sound patterns of what will become their native language.

These essential principles of pattern recognition and their relationship with our personal development remain with us throughout our lives. So powerful is the impact of patterns on us that by the time we are adults, patterns and colours in our surroundings can evoke a wide spectrum of physical, emotional, and psychological responses in us, ranging from cheerfulness and a drive to get things done to irritation or procrastination.

Psychologists understand that our responses to the things that surround us are conditioned by both our instincts and the predispositions we learn as we grow. In other words, the way we are affected by patterns is determined by both nature and nurture. Knowing this can help us to design buildings that promote specific moods and evoke certain ideas in the majority of people, especially when we understand the cultural associations of patterns, shapes, colours and textures in the context in which they are used.

Pattern also helps to define space and change our perceptions of space. For example, this means that the intelligent use of pattern can be an important way of striking the right balance for designers and facilities managers who need to resolve the potentially contradictory need for people to be as productive as possible with the need of the organisation to maximise the use of space. Similarly, while the choice of the right pattern in an office can help people to feel relaxed and motivated, the choice of the wrong pattern can be dispiriting, disorienting and may even affect people’s sense of balance, causing them to feel queasy.

So, just as the hospitality industry uses patterns and icons to attract a particular clientele, office interiors must apply the same thinking to create environments that evoke specific ideas and feelings. This can include conveying the beliefs associated with a particular brand. Pattern can be used to subtly communicate corporate identity by reflecting the values of an organisation.

The recognition of patterns can also be essential in enhancing creative environments. Some of the world’s greatest creative minds have understood the appeal of patterns. This is evident as much in the work of modern photographers such as Andreas Gursky, as it is in the work of past masters such as Leonardo Da Vinci.

Some artists have made it the focus of their work. It is core to the work of MC Escher, which not only seeks patterns in our surroundings but plays with the way we perceive them. The artist Andy Goldsworthy reflects the patterns of nature in his work, using natural materials in the open air to create meaningful associations in a natural context.

It is no coincidence that there is an association between creativity and pattern. Our inbuilt drive to find meaning in the world is nothing more or less than the drive to identify and interpret the patterns in all that we see.