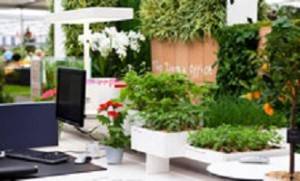 Allowing staff to make design decisions in a workspace enhanced with office plants can increase wellbeing and wellness by as much as 47 per cent, increase creativity by 45 per cent and increase productivity by 38 per cent, new research has revealed. Visitors at this year’s Chelsea Flower Show were challenged to take part in the study which measured their creativity, happiness and productivity as they experienced a range of different workspace designs. The findings, which would be expected to translate to a significant increase in business profitability, confront the popular belief that plants and art are an unnecessary or even wasteful element of the business environment. Results from this and related scientific investigations indicate that across all measures of psychological comfort and business performance, the managerially popular flexible, controlled, lean office, is consistently inferior to a space enriched by the design decisions of people who work there.

The study, designed by the Identity Realisation research group at the University of Exeter, in association with Indoor Garden Design, compared people’s effective output across different types of business space. Ninety experiments took place across the week and involved a total of 350 participants.

Psychologist Dr Craig Knight from the University of Exeter said: “We have previously shown that designing your own workspace improves health, happiness and productivity.

“It was time to go a step further and see whether the principle can also be applied to creativity and indeed whether the very act of designing the workspace can be used effectively. Results at the show demonstrated how creativity can be increased by 45 per cent through improving the psychological well-being and design of a working environment.

“The results from the Chelsea Flower Show experiment indicate that plants, in a well designed and personalised office environment can boost business effectiveness through improved staff productivity and creativity. This gives company managers a real incentive to share control of office space with their staff and create meaningful, les didactic and more grown-up space.”

The Chelsea experiment allowed the public to experience one of four typical office designs. Visitors were invited to undertake tasks to measure their productivity, wellbeing and creativity. The measures were collated for each office design and differences between the designs were assessed as part of the results data.

Ian Drummond, Creative Director of Indoor Garden Design said: “I was delighted to be a part of this very important experiment. So much of what we do is about putting living nature into offices – the health benefit of plants is so important in the workspace. I felt it was important to release the results during National Plants at Work Week to raise the awareness of our need for plants at work.”

The experiment builds on Knight’s research with colleagues from the University of Exeter’s Psychology Department. Previous work has revealed the potential for remarkable improvements in job satisfaction and performance by allowing workers to personalise their office space. The research showed that employees who have control over the layout of their workspace are not only happier and healthier but are also more productive to the tune of 38 per cent when compared to a lean space.

This latest study will precede a two part longitudinal workplace investigation by Dr Knight with large office based organisations.