Prague best city in the world for remote working, but Johannesburg has cheapest coffee

New research has revealed the top 15 cities worldwide that are best for remote working and Prague is on top, with London ranked as the 5th best city in the world for remote workers. Inspired by the top 15 cities listed in InterNation’s Expat City Ranking Report, Powwownow analysed the cost of living, average monthly salary, internet speed, price of coffee, and cost of public transport in different places across the world. Cities were individually scored on each factor and ranked by the total number of points, to calculate the top 15 cities around the world. Calculating an overall ranking for each city, Prague was revealed to be the best city worldwide for remote workers. As well as a considerably low cost of living, the city falls within the Schengen zone, meaning EU citizens don’t need to apply for a visa to work there, making the Czech capital an ideal hub for digital nomads. Zurich was revealed as the city where people earn the highest wages, at £4,430 average monthly net salary.

Jason Downes, MD of www.powwownow.co.uk said: “Since the Flexible Working Legislation was introduced in 2014, businesses across the UK have seen a significant increase in employees working remotely. This means people have been able to change the way they work to fit better with their lifestyles and aspirations. The 9-5 isn’t as rigid as it once used to be, which means people are working from difference cities around the world.

“In order for companies to stay competitive and source the most talented workers, they need to make sure they allow their employees flexible and remote working schemes. We hope our ranking here in London will give people a little inspiration to where in the world they can work from next.”

Top 15 cities for remote workers based on the overall score: 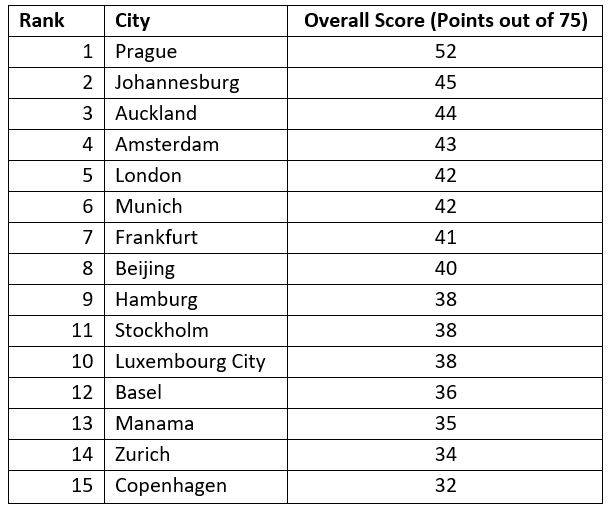 Table 1 – Each city has been scored based on the five ranking factors. 15 points were available for each factor, with 15 being the best and 1 the worst. (Maximum score attainable is 75)

Stockholm revealed to have the fastest Internet

For remote workers, high internet speed is a necessity to ensure good communication and collaboration. With an average countrywide internet speed of 22.5mbps, Stockholm was revealed as the best city for super-fast connectivity. In comparison, reports showed that internet speed in Johannesburg is at a mere 6.70mbps – nearly four times slower than the Swedish capital.

However, as the home to the cheapest coffee at just £1.44 per cup, Johannesburg could be great for remote workers who aren’t too dependent on speedy internet. With an array of affordable coffee shops and co-working spaces to choose from, South Africa’s biggest city can offer a great hub for remote workers who want to be somewhere that’s a little more ‘remote’.

You can discover the full ranking with detailed costs of living, transport, coffee and internet speed here: