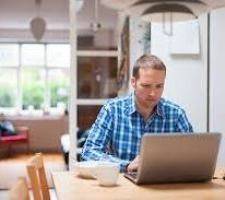 We reported earlier this week that flexible working has gone mainstream, with over a third of organisations now offering some kind of flexible working arrangement. The question is whether these flexible workers are more productive, as some employers persist in perceiving a flexible working request as a means of ‘shirking from home.’ Now new research to mark National work from home day, shows that 48 percent of workers are happier when they can work from home and nearly a third (32 percent) of British workers ‘feel more productive’ when they do so. The study by the Institute of Inertia, a partnership between comparethemarket.com and the University of Sheffield, found that nearly a quarter (24 percent or 7.5 million) of British workers would rather work from home one day a week than receive a pay rise, while seven million admit they suffer from ‘procrastination or inertia issues’ when working in an office.

Dr Thomas Webb, social psychologist at the Institute of Inertia said: “Working from home not only allows workers to embrace a healthier work-life balance but also gives them the opportunity to focus on the tasks at hand, rather than be distracted by meetings and everyday office life. It also makes employees feel trusted and valued by their bosses leading to higher retention levels.

The top five reasons for better productivity for home working are:

Despite the benefits for employees and employers, the Institute of Inertia study found that almost half (48 percent) of British workers never work from home, even though 60 percent would if their boss gave them the option.

The study also revealed that home working is more productive for older workers, with nearly three quarters (73 percent) of 45+ year olds being more productive at home, compared to 30 percent for 18-24 year olds. Over 45s also reported feeling .more in control of their workload’ (74 percent), ‘less stressed’ (65 percent) and ‘generally happier’ (77 percent) when working from home – an important insight given that 36 percent of the UK’s working population will be over 50 by 2020.

Bosses will also be relieved that only 1 in 8 (12.5 percent) women and 11 percent of men admitted to ‘doing as little as I can get away with’ when home working, although more women (8.77 percent) than men (4.60 percent) confessed to working from their bed. Nevertheless, 1 in 6 (17.57 percent) of Brits ‘never get dressed’ when working from home.

When it comes to effective home working, the survey found that access to high-speed broadband (66.5 percent), is now the most ‘essential technology’.

Phil Flaxton, Chief Executive of Work Wise UK said: “Work is something you do, not somewhere you go, and adopting a flexible culture has been proven to cut down on wasted time and cost. Many British companies are now looking to recruit and retain staff by offering flexible work options. Furthermore, the rise of technology, such as broadband, cloud computing, instant messaging and handheld devices means working from home is more productive than ever and very easy to implement.”

Where is the data for disability on boards – and do businesses care? It isn’t easy to grow big when being small makes you more innovative