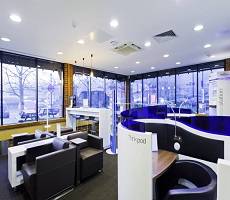 A new dedicated drop-in office has been opened by Regus at Sandbach South motorway service area on the M6 motorway this week. With previous research commissioned by the serviced workspace provider revealing that two fifths of mobile workers had dialled into conference calls whilst driving; dedicated workplaces at motorway service areas are intended to help combat the problem by offering a convenient place to stop off and work, for a few minutes or a few hours. The new drop-in offices will be followed by further Regus Express launches before Christmas at Strensham North (M5), Watford Gap (M1), Chester (M56) and Norton Canes (M6 Toll). The facilities will each feature a drop-in business lounge and high-specification meeting rooms available by the hour and are aimed at attracting those wanting to hold out-of-town meetings and self-employed people seeking an occasional alternative to the home office.

Phil Kemp, Global Managing Director of Regus Third Place said: “We are excited to open our first workplace on the M6, which will shortly be followed by several other locations across Roadchef’s network.

“One of the primary ways that they are used is by motorists dropping in to check their emails and make urgent phone calls, rather than doing this at the wheel. Regus Express offers them a safe, quiet and productive business environment. They also serve as convenient meeting points, and occasional workspace for remote workers.”