Sitting down is no worse than standing for long periods, claims new study 0

As we’ve always argued, the now commonly parroted idea that ‘sitting is the new smoking’ is extremely dubious and has led to a degree of hysteria about the effects of sedentary work and the substitution of one harmful extreme for another. Now a new peer reviewed study from researchers in the UK and Australia confirms earlier findings that suggest that what is important is not posture or position, but movement. The study of 5,000 civil servants over a 16 year period was carried out by researchers from the University of Exeter, University College London, and the University of Sydney (Australia) and funded by organisations, such as the British Heart Foundation, Stroke Association, the National Heart and Lung Institute, and the National Institute on Aging. It concludes that ‘no associations were observed between any of the five sitting indicators and mortality risk’.

The study tracked the working and lifestyle habits and health of 5,000 civil servants in London since the 1990s to gauge whether the amount of time people spent sitting increased their risk of early mortality. The lead researcher Melvyn Hillsdon of Exeter’s Sport and Health Sciences Department concludes that “any stationary posture where energy expenditure is low may be detrimental to health, be it sitting or standing”.

The notion that ‘sitting is the new smoking’ is rooted in a 2013 TED Talk from Nilofer Merchant which you can see here. 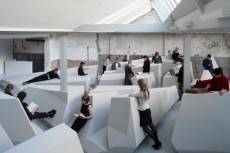 The idea has been popularised over the past couple of years by an office furniture reseller called Active Working which has used a front campaign called Get Britain Standing to create the impression that sitting down for just four hours a day is associated with major health problems. This has led to a great deal of misleading media headlines and the sort of ill-advised thinking that culminated with the design of a completely chairless office by Dutch designers RAAAF and artist Barbara Visser called “The End of Sitting” (top and right).

As more peer reviewed research shows, what is most beneficial is a culture that promotes movement, changes of posture and exercise.