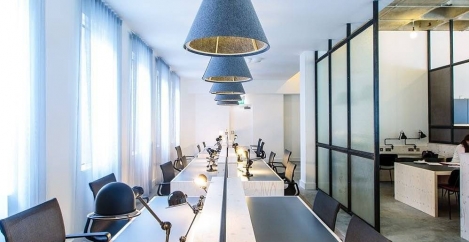 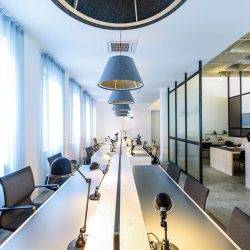 The ‘gig economy’ continues to drive London’s thriving flexible workplace sector which accounted for 8.8 percent of total office take-up in 2016, according to a new study from Cushman & Wakefield. The report claims that the pace of development will continue for the foreseeable future, not least because of the number of corporate occupiers taking on coworking space. Flexible office space accounted for more than 4.5m sq ft of take up in London over the past five years as the capital has cemented its place as the leading global market for coworking, according to the research. In 2016, flexible office take-up amounted to 842,888 sq ft across Central London, representing 8.8 percent of total take-up – slightly above the five-year average of 8.4 percent. 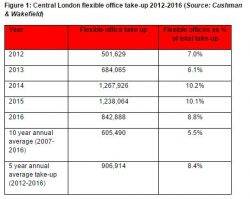 Juliette Morgan, International Partner and Head of Cushman & Wakefield’s Global Tech Group, said: “The latest figures confirm London’s preeminent position as a leader in flexible or coworking space. The boom over the past five years has been fuelled by the gig economy, as well as a thriving technology sector which means traditional working patterns have changed irrevocably. We are also now seeing larger corporates including the likes of HSBC and Microsoft wake-up to the trend and place staff in coworking spaces as means of collaboration and access to talent. It’s also a signal to the market that as a large company you recognise and embrace innovation. 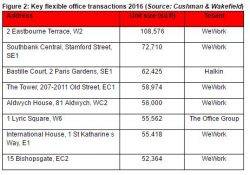 “Large corporates that traditionally offered big salaries but sterile working environments have had to up their game in response to the growth of the tech sector which has been attracting the cream of the talent pool. This has led to an increased focus on stimulating workspaces that spark creativity and improve employee satisfaction in order to secure and retain the brightest minds.”

From an investor perspective the market for coworking space is also growing rapidly in London via privately-backed providers such as WeWork, as well as listed REIT Workspace. New York-based provider WeWork has expanded rapidly since entering the UK in 2014 and secured a further eight locations over 50,000 sq ft in London during 2016. In addition, Hong Kong-based investor Kingboard purchased We Work’s European headquarters at Moor Place for £271million, with Cushman & Wakefield acting for the seller.

Elaine Rossall, Head of London Markets Research, added: “London’s coworking market – already the largest in the world – is only going to get bigger and expand more rapidly in response to workplace trends. The market will become increasingly competitive as it becomes further established and providers will need a strong brand and points of differentiation, if they are to continue to attract the necessary levels of tenants through the doors.”