Is it time to stamp out e-cigarettes in your workplace? 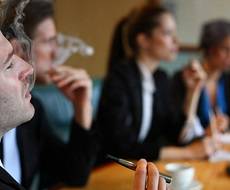 Electronic cigarettes, love them or hate them, they are here, but are they here to stay? Since 1 July 2007, smoking in enclosed or substantially enclosed public places and workplaces in the UK has been prohibited. E-cigarettes however emit water vapour rather than smoke and therefore could be legally used in public places and workplaces. But there is increasing debate about the use of e-cigarettes in public places, as concern grows about their potential harmful effects. It’s been alleged that e-cigarettes contain chemicals that could make them as harmful as normal tobacco. The World Health Organisation (WHO) calls the devices safety “illusive”, noting that the chemicals they contain are often not disclosed and have not been properly tested, while a report commissioned by Public Health England said e-cigarettes required “appropriate regulation, careful monitoring and risk management” if their benefits were to be maximised.

France’s National Consumers’ Institute tested 10 different rechargeable and disposable versions for carcinogenic and toxic properties, and found evidence to support these concerns. In addition, the report also highlighted that childproof safety caps were not fitted, exposing children to the nicotine liquid content which can be lethal.

The French Government looks set to ban e-cigarettes soon in line with regular cigarettes and order plain packaging with health cautions for e-cigarette products on the basis of these concerns. Several US cities and Brazil have already done this. Wales is also currently consulting on banning e-cigarettes in public places due to concerns that they normalise smoking. However, the UK Government at this stage is intending to regulate e-cigarettes by licensing them as a medicine from 2016.

The British Medical Association (BMA) has expressed its concern at the lack of regulation on the production and use of e-cigarettes. It believes the existing smoke free legislation in place in the UK should be extended to include vapour from e-cigarettes. As an interim measure, the BMA is encouraging employers to put in place policies prohibiting the use of e-cigarettes in workplaces.

Transport For London, some rail companies, airlines and restaurant and pub chains have already banned e-cigarettes from being used by customers.

Many other employers though are unclear about what they should do. Do they ban e-cigarettes in the workplace and make e-cigarette smokers use the same designated area as the other smokers?

Some employers may decide to wait until the UK Government acts first to ban them, but given the reports to date, employers should be reviewing their policies and deciding whether to stamp out e-cigarettes now.