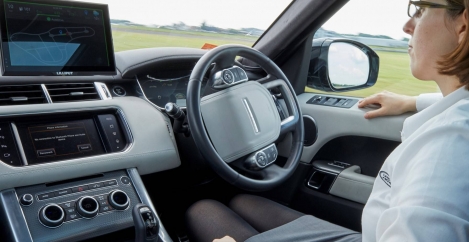 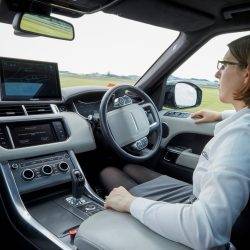 The UK’s largest trial of connected and autonomous vehicle technology has been given the green light to move out onto city streets, after a UK consortium completed its final set of private test track demonstrations. Project partners Jaguar Land Rover, Ford and Tata Motors European Technical Centre (TMETC) are set to trial vehicles on the roads of Milton Keynes and Coventry, as Jaguar Land Rover announced the latest version of their automated, driverless vehicle technology. The three vehicle manufacturers are taking part in the £20 million UK Autodrive research and development project, jointly funded by government and industry. UK Autodrive claims to be the first project in the UK to showcase the benefits of having cars that can “talk” to each other across multiple makes of car. Three of the seven key features of connected cars (see full list below) will be trialled during the three-year programme.

The first demonstration (Emergency Vehicle Warning) showcased cars that can warn their drivers when an emergency vehicle is approaching – as well as indicating its direction – minimising congestion and potentially reducing the time it takes for ambulances, police cars and fire engines to reach their destination.

During the second demonstration (Intersection Collision Warning), the connected cars were able to detect the presence of other connected cars on approach to a junction, and warn whenever there was a high probability of a collision.

The third demonstration involved ‘In-Vehicle Signage’, whereby connected cars can receive traffic information sent from road-side units, ensuring that drivers do not miss out on important notifications, such as changes of speed limit or temporary lane closures.

In a recent off road trial, an automated Range Rover Sport fitted with the prototype technology was able to navigate its way around an urban-style road network, successfully negotiating roundabouts and junctions while also steering around obstacles.

“The successful completion of the proving ground trials marks a significant milestone for the project team, and we are now looking forward to demonstrating the benefits of these exciting new technologies in the real-world settings of Milton Keynes and Coventry,” said Tim Armitage, Arup’s UK Autodrive project director. “Once the technology becomes widely available, we anticipate huge potential benefits in terms of road safety, improved traffic flow and general access to transport, so we’re really excited about being able to demonstrate this on real roads.”

The first set of public road trials are due to take place in Milton Keynes and Coventry by the end of this year, initially on segregated sections of roads, before evolving into open road trials and demonstrations as the project draws to a close in summer 2018. A fleet of up to 40 self-driving pavement-based ‘pod’ vehicles will also be introduced in pedestrianised sections of central Milton Keynes as a separate part of the project.

List of connected car features being trialled within the UK Autodrive programme:

Intersection Collision Warning (ICW) – Warns the driver when it is unsafe to enter an intersection, due to a high probability of collision with other vehicles.

In-Vehicle Signage (IVS) – Sends information about road conditions, congestion or other incidents directly to the in-car display, rather than having to rely on expensive gantry systems.

Electronic Emergency Brake Light (EEBL) – Alerts the driver when a vehicle in front suddenly brakes, providing advanced warning, especially when the driver is unable to see the lights of the braking vehicle due to weather conditions, road layout or other vehicles in between.

Collaborative Parking – Provides real-time information about free parking spaces either in the vicinity or close to the driver’s final destination.