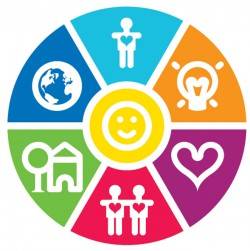 The overall wellbeing of the UK population continues to improve despite ongoing concerns about pay levels and job security, according to a new report published today by the Office for National Statistics. The latest analysis includes an assessment of changes in national wellbeing for the first time and finds that year on year 33 percent of indicators had improved, 42 percent showed no overall change, 21 percent were not assessed and 5 percent deteriorated. The proportion of people in the UK giving the highest ratings for each aspect of personal wellbeing measured by the report increased significantly in the financial year ending 2014. The report defines wellbeing as a measure of “how we are doing as individuals, as communities and as a nation, and how sustainable this is for the future” based on 41 metrics.

The Life in the UK report presents a set of 41 headline measures of national wellbeing, organised by ten key areas such as Health, Where We Live, What We Do and Our Relationships. The measures include both objective data (for example, number of crimes against the person per 1,000 adults) and subjective data (for example, percentage who felt safe walking alone after dark).

By examining the headline measures, for example, ratings of life satisfaction, our sense of belonging to our neighbourhoods, and measures of inflation, the report considers wellbeing across each of the domains. There is reference to how sustainable our wellbeing is for the future through measures such as greenhouse gas emissions, but the majority of measures focus on current wellbeing. How sustainable national wellbeing is for the future is examined by looking at issues such as education, natural resources and community cohesion, known as “capitals”.

We are generally living longer and healthier lives. However, a significant proportion of the population have health concerns: three in ten people (31.4 percent) were dissatisfied with their health in the financial year ending 2013 and around 2 in 10 people (18.8 percent) reported having a long-term illness or a disability that was either work-limiting or limited their day to day activities in July to September 2014.

Research also shows that people with higher levels of personal wellbeing make better health and lifestyle choices – they are more likely to eat healthily, be physically active, and are less likely to smoke1. Conversely, where the quality and quantity of relationships is poor, people can feel lonely, which is bad for both individual wellbeing and health. The influence of social relationships is similar to other, well-understood, mortality risk factors, such as smoking and alcohol consumption, and is even greater than the influence of physical activity and obesity.

Most of us have good relationships with friends, family and neighbours, with over 8 in 10 (86.7 percent) reporting that they had a spouse, family member or friend to rely on a lot if they had a serious problem in the financial year ending 2011.

How we use our time has obvious links to our wellbeing. Active pursuits, such as engaging with the arts, being physically active and volunteering, boosts wellbeing, while inactivity can have a negative impact. In spite of this, more than half (58.1 percent) did not participate in thirty minutes or more of moderate intensity sport on a regular basis between October 2013 and October 2014, and 8 in 10 (81.1 percent) reported that they never, or almost never, did unpaid voluntary work in the financial year ending 2013. However, most of us reported engagement or participation in an arts or cultural activity (83.4 percent) in the financial year ending 2014, and more than three-quarters of us (77.6 percent) were at least somewhat satisfied with our work in the financial year ending 2013.

Increases in GDP suggest that the economy is getting stronger. However, since 2011, net national disposable income – that is, the income that is available to the government, businesses and households through production at home and abroad – has remained broadly flat, at £21,888 in 2013, compared with £22,146 in 2011.  This suggests that while production in the UK is increasing, the income available to us from that net national disposable income is not increasing in the same way.

The value of human capital in 2013, while broadly stable compared with 2012, has deteriorated over the 3 year period and remains at its lowest since 2005. The proportion of people aged 16 to 64 with no qualifications has fallen significantly over the past decade, and the proportion of pupils gaining 5 or more GCSEs at grades A* to C, including English and Mathematics, has increased over this period. However, the gender gap for GCSE attainment widened over the last few years.

Data from autumn 2014 suggest that the majority of people in the UK are not politically engaged. Almost two-thirds (62 percent) of people in the UK tend not to trust the government, but this is not a particularly high proportion when compared to other EU countries and is considerably lower than, for example, France, Italy and Spain, where the proportion is closer to three-quarters. Voter turnout at the last general election, while higher than the last two general elections, was the third lowest since 1945. In comparison, however, more than 8 in 10 people voted in the Scottish Independence Referendum in 2014.

The UK is making progress towards key targets such as emissions of greenhouse gasses, renewable energy production and recycling. For example, the UK has a target to recycle compost or reuse at least 50 percent of the waste generated by households by 2020. In 2012, this figure was 43.9 percent, an increase of almost 4 percentage points compared with 2010.