Infographic: the uptake of flexible working and long hours is driven by BYOD 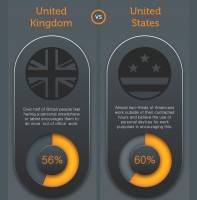 The rise of BYOD as a near universal way of using smart devices in the workplace may be problematic for employers in some ways but is attractive in others. Not only does it save the cost of providing people with stuff in the first place, it is also driving the uptake of flexible working according to a survey from software developer (what else?) Cint. And in this case, when we say flexible working, we mean long hours. According to the report, significantly more than half of workers in both the UK and US do more work away from the traditional workplace as a direct result of using their own devices. In the UK, nearly a quarter of staff feel employers like them to use their own technology to encourage more out of hours working. IN the US it is nearly a third.  Full infographic below.

Three fifths (59 percent) of the 935 people surveyed in the UK survey said they worked outside of office hours, with a quarter (26 percent) saying they worked six hours or more per week beyond their contracted time. In the US, that number was 40 percent.

But it’s not only the free additional work that firms like. In the UK, around two-thirds of staff cover the entire cost of using smartphones personally with only a fifth (22 percent) saying their employer covered all the costs of their smartphone. That is probably the reason why Cisco’s Internet Business Solutions Group said that implementing BYOD as a policy saves businesses upwards of $3150 per user.

Employers struggling to recruit the right talent finds survey Half the time it’s management, not the design that makes the workplace stink