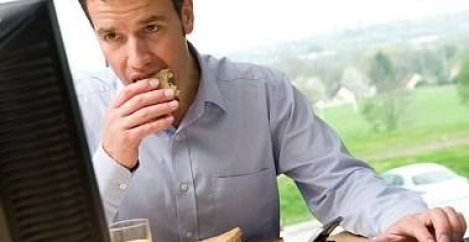 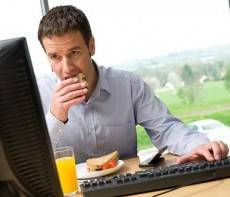 Many UK workers are under so much pressure they can’t escape their workplace for lunch, with almost three in five employees regularly eating at their desk. This could be having a detrimental long-term effect on the health of millions of workers across the UK. The results of a survey, commissioned by the National Charity Partnership, a collaboration between Diabetes UK, the British Heart Foundation (BHF) and Tesco, found that office workers say heavy workloads (32 per cent), workplace culture (14 per cent) and stress (13 per cent) are to blame for not getting away from their desks for a walk at lunchtime. Despite more than nine in ten employees reporting that being outside makes them feel healthier or more positive, more than half of workers who were questioned (52 per cent) never leave their office for lunch. Almost one in four (24 per cent) say they regularly work through their break.

This fact, combined with generally low rates of physical activity, means that experts are concerned that such sedentary behaviour could be contributing to rising levels of Type 2 diabetes and heart disease. The National Charity Partnership is calling on office workers to reclaim their lunch break and get walking to help protect their wellbeing. It is encouraging people to use its online motivational tool to help people set simple, realistic goals to move more.

Babs Evans, Head of Prevention for the National Charity Partnership, said: “When you’re under pressure at work it’s easy to forego a lunch break and instead grab a quick bite at your desk, but this isn’t healthy.

“Work-related stress puts a strain on your mental wellbeing and can have a knock-on effect on your physical health. People under too much pressure at work are more likely to eat unhealthily and stop being active: behaviours which are linked to a number of health conditions, including Type 2 diabetes and heart and circulatory disease.

“Both conditions are serious and affect millions of people in the UK, with millions more at risk. However, they are largely preventable and being active is an effective way to help reduce your risk.

“Even just a ten minute break away from your desk to go for a walk and clear your head can help to make a big difference with stress relief, which in turn is good for your health.”

Being physically active is known to help reduce the likelihood of developing Type 2 diabetes and heart and circulatory disease. However, only five per cent of workers who were surveyed do something active during their lunch break, such as going to the gym or for a walk. More than one in five (23 per cent) said they simply cannot be bothered.