Some improvement but levels of engagement remain low in US workplaces 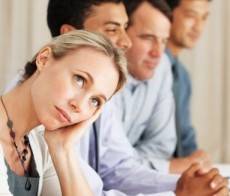 According to a new poll from Gallup, the proportion of US workers engaged in their jobs rose from an average 31.7 percent in January to an average 32.9 percent in February. The latest monthly rate of employee engagement is the highest Gallup has recorded in three years and is 1.5 percent higher than for the same period last year.  The study is based on Gallup Daily tracking interviews conducted with around 6,000 employees. Gallup categorises workers as more or less engaged or disengaged based on their responses to key workplace metrics that the pollster claims predict important organisational performance outcomes. With a third of US employees engaged at work – a figure that has remained consistent over the last three years – February’s data also showed that half (50.3 percent) of employees are not engaged and 16.8 percent are actively disengaged at work.

Even so, the latest figures are some of the best since Gallup began tracking engagement levels three years ago.  The highest recorded rate of engagement was 33.8 percent in March 2011. Since then, monthly engagement has consistently averaged less than 33 percent. 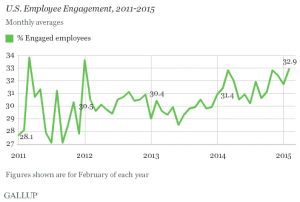 The report suggests that there is a close link between key economic indicators and levels of employee engagement. “The slight gain in February engagement may be partially attributable to the nation’s economic situation”, claims the report. “As unemployment continues to dip and more workers find jobs, companies may be facing renewed issues with retention, leading them to put more emphasis on engagement as a way to keep their workers from seeking new job opportunities.

“A decline in the percentage of unemployed and underemployed Americans may have some influence on the percentage of engaged workers. As the job market becomes more competitive, it is possible that companies are putting more effort into engaging their current workers. The slight rise in engagement may also be partly attributable to the workplace “honeymoon effect.” Prior Gallup research indicates that newcomers to an organisation are more highly engaged than tenured employees. And as more new employees 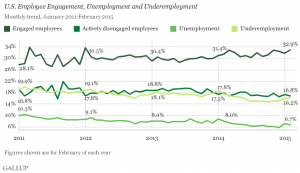 join company workforces, they may be helping to move engagement up.”

The report goes on to claim that “employee engagement is a leading indicator of future business success, and Gallup has discovered close ties between engagement and outcomes such as turnover, profitability and productivity. As the percentage of their employees who are engaged at work increases, companies find themselves better positioned to grow. And when they grow, companies consequently help strengthen the economy.”

Third of Millennials more engaged by contributing to company vision than a high salary How a big, stupid idea can be more attractive than a small, effective one