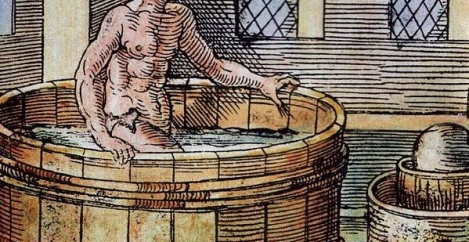 The vaguery of workplace serendipity 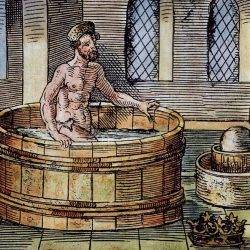 It has become vogue to refer to the workplace as being ‘all about people’. It points in all directions at once. Organisations need fit, healthy, happy, skilled, motivated, engaged and purposeful people being (and feeling) productive and doing their best work every day. They want their people working closely together – they’ve spent a lot of time and money drawing in those they feel can contribute to a whole that is other than the sum of the parts.

Yet the struggle for the perfect physical space that would most likely enable this to happen has been a constant for over a century. The key issue is that irrespective of the workplace in which we reside, we need to be in two places at once. That is, ‘place’ in the broadest sense, both physically and mentally. We need to have deep conversations with people we need to work with, in our teams, yet we also need to give ourselves the best chance of broadening our network to create opportunities for new ideas to emerge and teams to form around them.

The essence of the problem is that we see it as a design issue, that the physical arrangements we make will prompt the right behaviour, simultaneously allowing both. We would naturally expect that as the world of workplace is run by property folk, that a property solution would be pursued. Late in 2018 as the arguments once again raged about ‘open plan’ I created a taxonomy of the fourteen workstyles we have brought into being and explained that we have fourteen because no single workstyle yet has negated the need for the other thirteen. It’s not about workstyle. 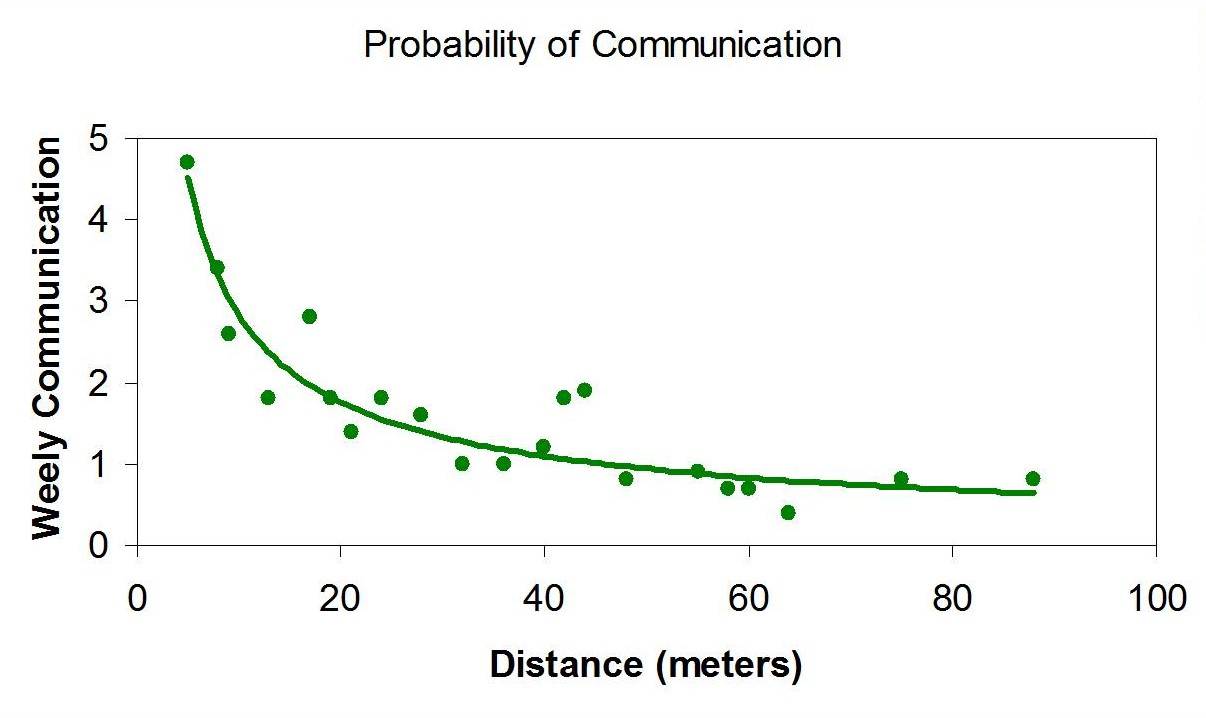 In his 1977 book Managing the Flow of Technology (yes, technology existed before the internet) Thomas Allen found that people in the workplace were four times as likely to communicate regularly with others located up to six feet (1.8 metres) away as they were with people sitting sixty feet (18 metres) away – and that people on different floors barely communicated at all. It gave rise to the Allen Curve. With the advent of electronic tools and social media it was assumed that the famed ‘death of distance’ would render the curve an artefact. However, when Allen re-visited the study in 2006, he found that instead the position had solidified: those who were co-located connected more frequently over digital media too. If we see people, we are prompted to communicate.

Almost every Silicon Valley leader over the last decade has confidently expressed the view that physical interaction in the workplace drives innovation. It led to decisions such as the ‘Mayer Memorandum’ in 2013 where Yahoo’s flexible workforce was required to return to the office to be with their colleagues. However, the overriding assumption on the part of each has been that interaction should be left to chance, with the workplace providing the routes and the prompts. Few appear to have ventured that this might be a risky strategy in two respects – of the interaction happening at all, or of its quality if it does. Relying on luck, on two levels, to drive the lifeblood of the organisation seems strangely vague in an impatient world. It is also expecting a lot of the static and impartial physical workplace. No prizes for guessing where much of the blame is likely to land. 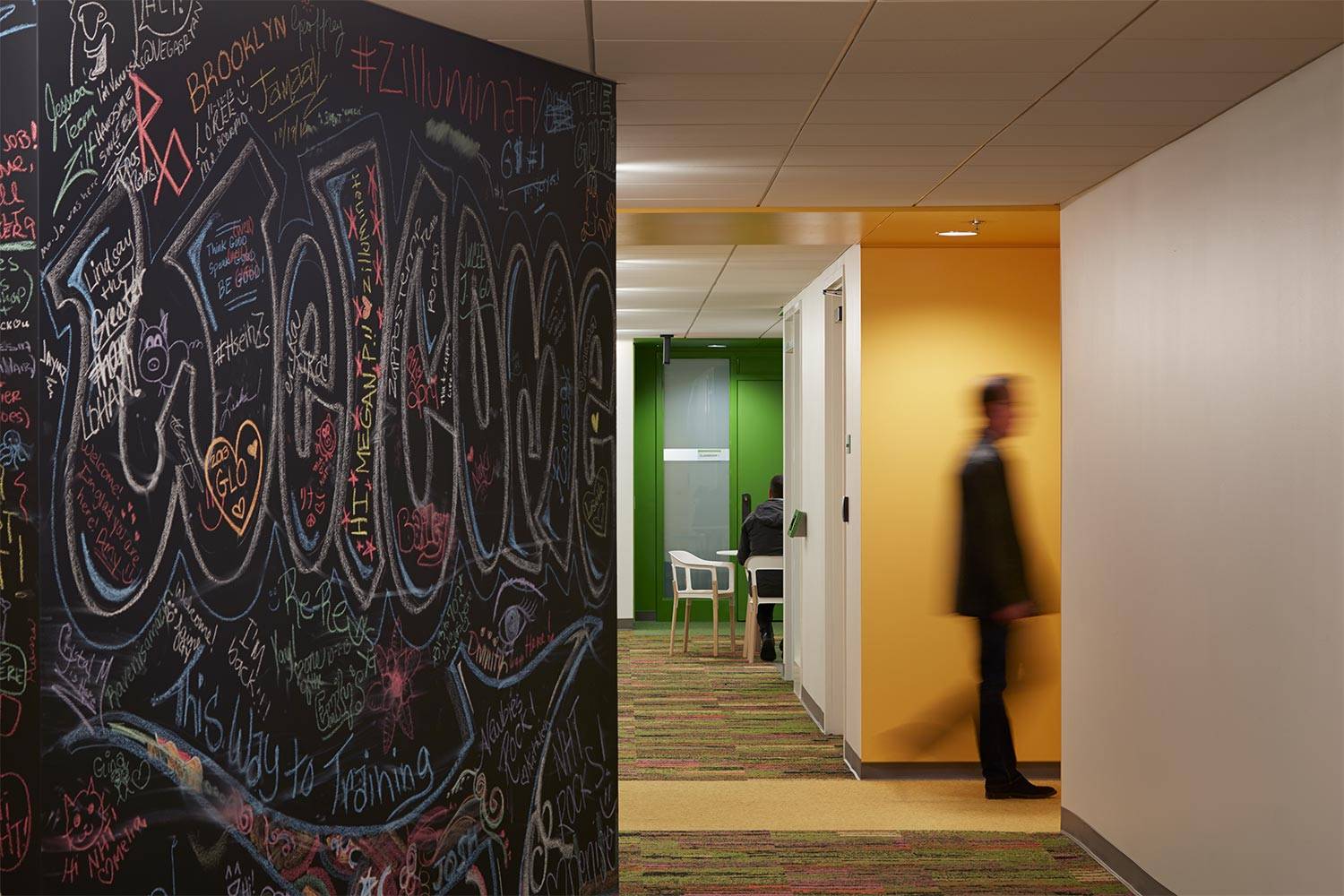 The rise of the agile (or ‘activity-based’) workplace rekindled the idea from the cubicle farms of the 1970s and 80s of the ‘watercooler moment’ – serendipitous casual encounters, unplanned and accidental interactions or collisions that would spark innovation. Some companies have even started to measure this – Zappos (no surprise) refer to ‘collisionable hours’, being the number of probable interactions per hour per acre as a measure of workplace effectiveness. A possibly more accurate definition of the watercooler moment might be that in the Urban Dictionary – ‘a significant moment in television history that is discussed the next day in the workplace’. That is because interaction in workplace amenities is most often social interaction first, with the slim chance of anything useful arising from it second. 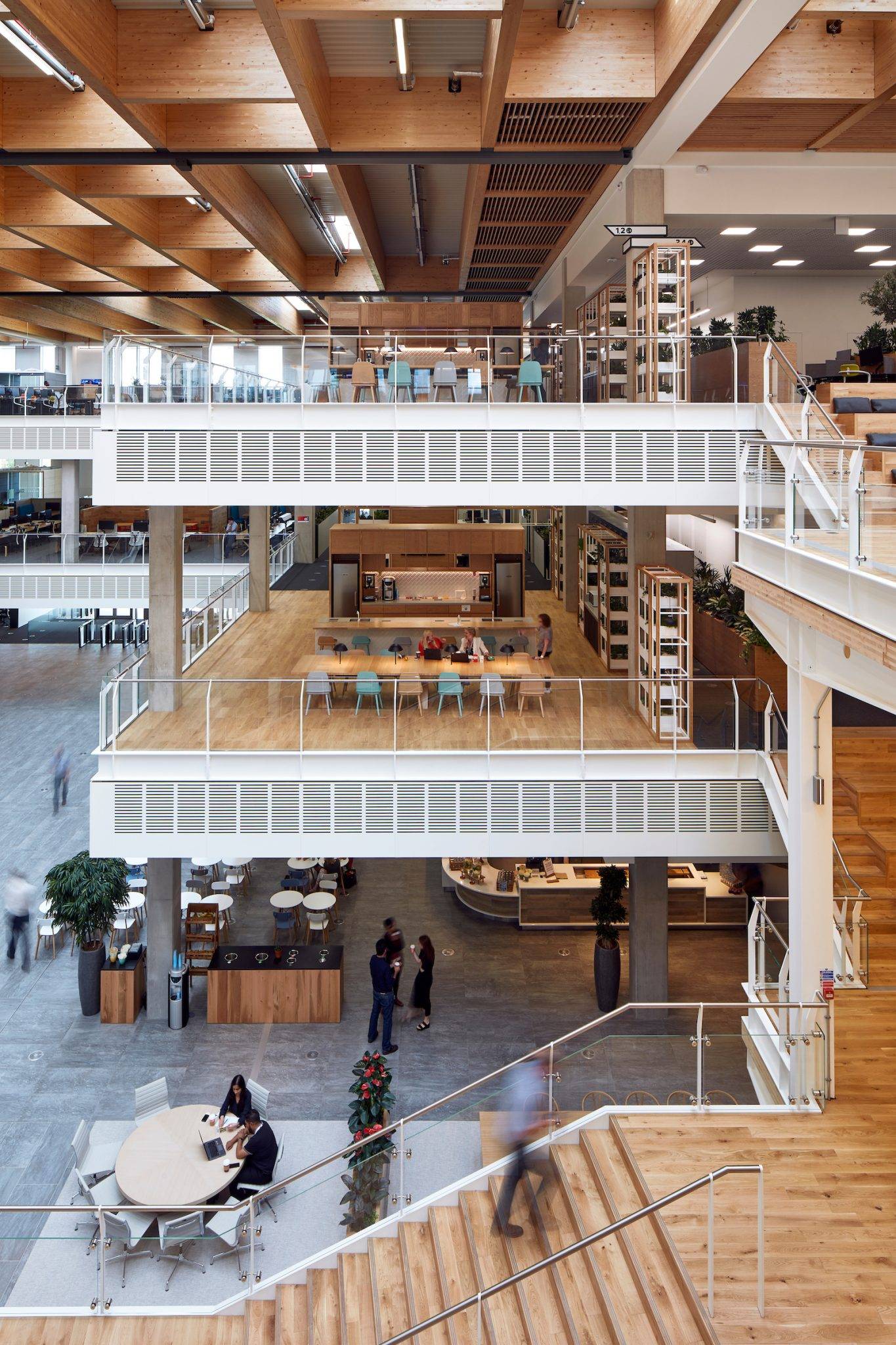 The strategy also misunderstands collaboration. It isn’t having a natter in the deliberately engineered lunch queue. That’s just having a natter, while getting frustrated at the queue. Genuine collaboration is precious. The Economist Intelligence Unit 2008 publication ‘The role of trust in business collaboration’ describes three levels of workplace interaction: co-ordination (‘get this done’ – driven by directive), co-operation (‘we need to’) and collaboration (‘I wonder if we could…’). Collaboration is driven by mutual self-interest and therefore requires a high level of trust to creates value that did not previously exist.

Given these qualities, collaboration will probably not happen in the lunch queue. It occurs when there is a deep connection, one where all parties may derive benefit. We may initially meet someone through a chance encounter, but it will take some time before there is sufficient trust for anything to emerge from that relationship. We build that through regular interaction, by being together and working together, by working in close proximity, building trust, and understanding the mutual benefit.

We begin to see how the workplace might meet our original conundrum of being in two places at once, while not relying on any combination of luck, the pervasive charm of the organisation’s most annoying extroverts or the optimum design of circulation routes: workspace that allows for deep conversations among trusting team members, and amenity-rich environments where away from the team workspace social connections may potentially be made – or may not, but at least we can get decent coffee. We return to one of the laws of workplace – balance. There is no getting away from it.

For Real Estate, bringing the right people together in the workplace has been a constant challenge, as it has always been a heavily time-consuming manual task involving printouts, coloured pens and a calculator, generating approximate and rapidly-outdated results, deploying skills possessed by a steadily-diminishing cohort of specialists. Hence, a number of strategies have emerged over the last two decades to try and make it easier, including the self-organised serendipitous activity-based workplace and its anxiety-ridden and much-derided elder sibling, hot desking.

Playing things by the book

We have seen the reincarnation of booking systems – where people reserve the desk or meeting space as they need – once popular with professional services firms in the 1990s. However, this introduces another layer of activity required from those already ridiculously busy and assumes collaboration can happen to schedule. Taking a more JIT approach, what we might call ‘sensor hoteling’ has given us the parking-lot traffic light system where available desks are highlighted green – yet they don’t allow teams to know where their colleagues are, nor enable regular co-location. Our life in the office should about so much more than ‘finding a desk’. Both booking and sensor hoteling also lead with the efficiency play – space reduction, or ‘optimisation’ as it’s often dubbed so as not to cause quite as much alarm.

Finally, we have even started sending people away to co-working spaces in the hope they will find collaboration in cooler, dachshund-rich corners. Yet this leaves swathes of expensive leased space empty, needlessly exacerbating the sense of failure, and presents a bill for even more expensive flexible space and a disgruntled majority feeling left behind. Yet the same fingers-crossed strategy for collaboration operates in flexi-space. It doesn’t solve the problem of team collaboration, it perpetuates it. In addition, not only are people needing to deal with having to be in two places at once, so then is the organisation. The Allen Curve has long petered out by the time we are on opposite sides of town. 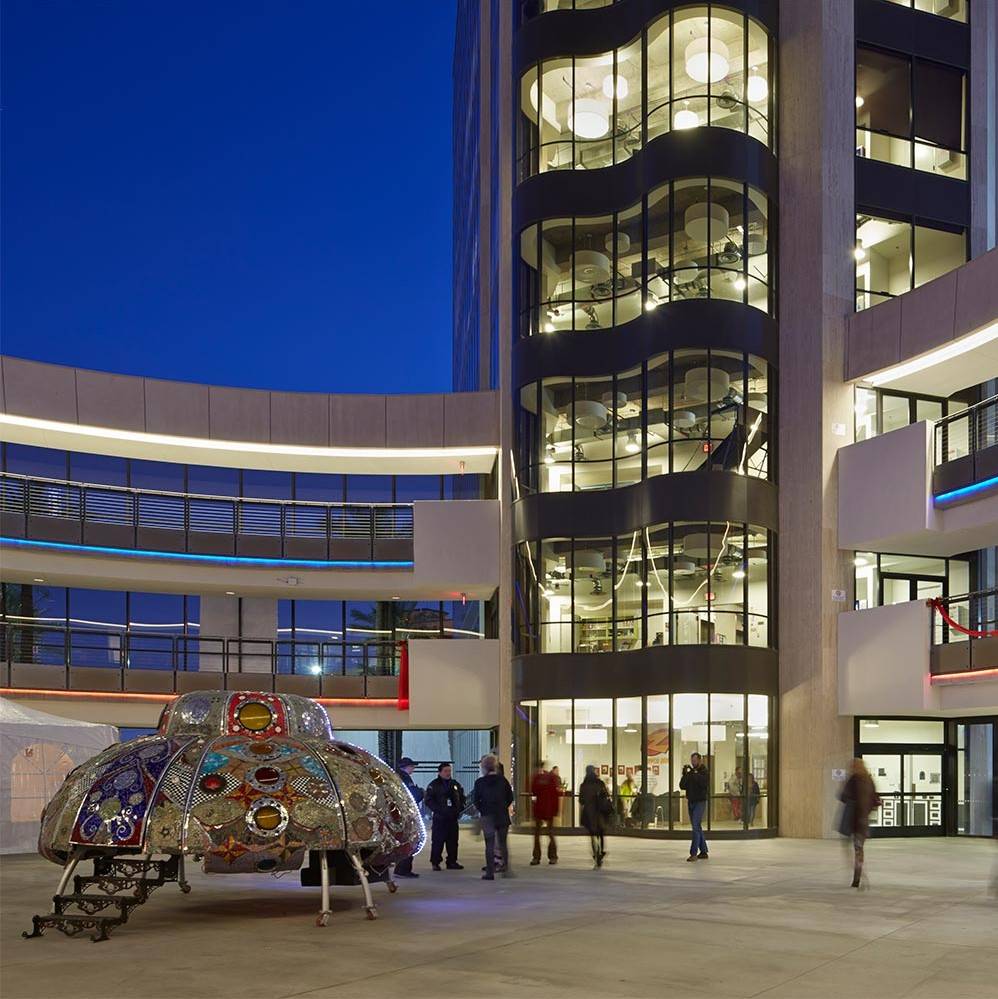 Attempts to ‘engineer’ chance have seen the deployment of wearable sociometric badges, gathering data on how we interact, communicate and where we go, based on the 2012 work of Alex Pentland. All very The Circle. The conclusion is always that more interaction is better than less, but the studies try to look at the type and scale of interaction based on the data gathered to de-risk the anticipation. The resulting workplace is oriented to stimulate more initial, casual encounters to create an improved chance of deeper association. However engineered though, it’s still all down to the vagaries of chance. Pentland’s conclusions were not the same as those of Google’s 2015 Project Aristotle however, where psychological safety was found to be the key ingredient of successful teams, reinforcing the notion that effective collaboration is built on trust – which takes time. Quantity can’t solve that.

In all these strategies we are generating ever more significant amounts of data, but when the analysis is over and the ticker-tape needs changing, we still have to make sense of it all. We may have our ideas digitised, but the task of deriving solutions is still up to us. We therefore invariably resort to what we know. Having tried the options described, we revert to the vague strategy of hope advocated by the giants – and re-design the workspace and start all over again.

Yet the challenge remains. In our amenity-rich workplace when the dawn pilates is done and the lattes downed, we need to enable the right people to work together and they need to know they can. We need to empower teams, to give them the best chance of being successful. We need to do this dynamically and accurately, anticipating and reflecting change, using the data we gather to generate solutions in real time. Why would we leave it to chance?

Neil Usher is Chief Partnership Officer at GoSpace AI, an internationally renowned workplace strategist and former Workplace Director at Sky. His books The Elemental Workplace and Elemental Change are a must read for anybody with an interest in work and workplaces.