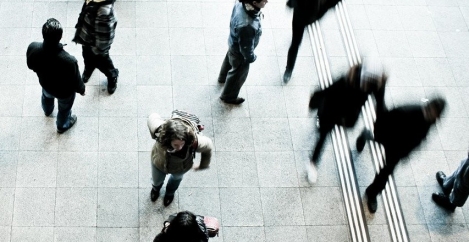 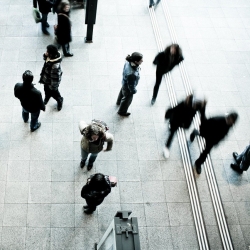 The idea of a Global Village comes loaded with a number of idyllic connotations. Most of them derive from the use of the word village itself, which triggers the idea of a community in our minds. Yet even the man who coined and popularised the term in the 1950s and 60s to describe a world contracted by new media understood that there are always complications whenever technology rubs up against human beings.

In several interviews and articles Marshall McLuhan argued that the new, technologically mediated processes that help to bring people together in the modern world are also prone to increase tribalism. He spoke about this paradox in his final interview with a Canadian television programme in 1977.

In response to the interviewer’s suggestion that the global village as he described it would heal divisions and bring people together, McLuhan responded:

The closer you get together, the more you like each other? There’s no evidence of that in any situation that we’ve ever heard of. When people get close together, they get more and more savage, impatient with each together….The global village is a place of very arduous interfaces and very abrasive situations.

Looking back from the 21st Century, we can see how these forces play out. Not only in the tribalized, toxic disputes we would be better off avoiding on social media but also in the way that technology brings people with bad ideas together and hands them a megaphone. Look no further than the anti-maskers and anti-vaxxers.

McLuhan’s work suggested that the advent of literacy and the printing press had originally detribalized people, whose previous experience of the world was immediate, based on their consumption of information in the moment through their senses. The printed word meant tribal humans had evolved into literate humans.

In a 1969 interview with Playboy however he argued that we were entering a new phase of post-literacy which had the reverse effect. Literate, post-tribal humans were becoming electronic, re-tribalized humans.

The basic thing to remember about the electric media is that they inexorably transform every sense ratio and thus recondition and restructure all our values and institutions. The overhauling of our traditional political system is only one manifestation of the retribalizing process wrought by the electric media, which is turning the planet into a global village.

The electronically induced technological extensions of our central nervous systems, which I spoke of earlier, are immersing us in a world-pool (sic) of information movement and are thus enabling man to incorporate within himself the whole of mankind. The aloof and dissociated role of the literate man of the Western world is succumbing to the new, intense depth participation engendered by the electronic media and bringing us back in touch with ourselves as well as with one another. But the instant nature of electric-information movement is decentralizing – rather than enlarging – the family of man into a new state of multitudinous tribal existences. Particularly in countries where literate values are deeply institutionalized, this is a highly traumatic process, since the clash of the old segmented visual culture and the new integral electronic culture creates a crisis of identity, a vacuum of the self, which generates tremendous violence – violence that is simply an identity quest, private or corporate, social or commercial.

All our alienation and atomization are reflected in the crumbling of such time-honored social values as the right of privacy and the sanctity of the individual; as they yield to the intensities of the new technology’s electric circus, it seems to the average citizen that the sky is falling in. As man is tribally metamorphosed by the electric media, we all become Chicken Littles, scurrying around frantically in search of our former identities, and in the process unleash tremendous violence. As the preliterate confronts the literate in the postliterate arena, as new information patterns inundate and uproot the old, mental breakdowns of varying degrees – including the collective nervous breakdowns of whole societies unable to resolve their crises of identity – will become very common.

In this sense, the Global Village distorts our idea of a community. This is not based – as it once was – primarily on geography and our physical, chaotic interactions with our fellow humans in shared spaces. Instead, it focuses on our self-perceived identity, and especially the identity we have forged by seeking out a community or communities online with which we can interact in predictable ways. We are then prone to project this identity on to the world and filter our understanding of it based on our experiences and those of people like us.

As Timandra Harkness points out in this piece, the conversation about work and society catalysed by the pandemic has been largely driven by certain tribes with little or no acknowledgement of the existence of others. Those people, in many cases the majority, haven’t had a look-in. Only 3 percent of the UK workforce commute into London each day, and yet for weeks last year you would have been forgiven for thinking it was 97 percent. The fate of Pret a Manger in the central business district is not of interest to most people.

Less than half of UK employees worked remotely during the pandemic

As we emerge, blinking like bears, into a post-Covid summer, those devices which connected us will still be clutched firmly in our paws. Although I foresee a euphoric embrace of face-to-face, not to mention skin-to-skin, human contact, I also predict that interaction through the safe filter of technology will be more firmly embedded than ever in most people’s lives.

New divides emerged in 2020, as existing social differences were catalysed by crisis into visible cracks. Those who embraced working from home, and are not keen to return to the commute and the office routine, are generally older people with families and bigger houses. They have enjoyed the freedom to fit the school run into their day, spend less time on the train and more in the garden, less time with annoying colleagues and more with Lockdown Puppy. Younger workers, hunched over laptops in shared flats and houses, show less enthusiasm. For them, going out to work is an opportunity to learn informally about the job and workplace culture, to meet people, to explore the wider world beyond their front door.

Then there are the workers whose jobs cannot be done from home. Less than half of UK employees worked remotely during the pandemic. Unfortunately, most of the media fell into the working-from-home side of that divide. That skewed the narrative of 2020 towards questions of sourdough and birdsong, and away from the continuing reality of people whose jobs still had to be done in worse conditions, or those whose work evaporated overnight.

These divides won’t continue in exactly these forms, though they will add to the many fractures in society. What will persist, exacerbating the splits and hampering our ability to recover from both pandemic and economic shock, is the atomisation of society.

She is describing the forces outlined by McLuhan half a century ago. Our challenge now is to acknowledge them and do what we can. That will involve opening ourselves up to the experience of other people and especially those not like ourselves. We may find comfort in our tribe, but we also need to reach out to the world.

What happens to work when the machine stops? The city and the office have much to teach each other