France has joined the UK, Netherlands, Germany, Belgium and Denmark in offering a financial incentive for people to cycle to work. The six month scheme will see people paid to take to their bikes as a way of cutting traffic, pollution and fuel consumption as well as boosting people’s health. When announcing the scheme, Transport Minister Frederic Cuvillier, said that if  the pilot is deemed successful, it will be extended to confirm its outcomes. He hopes that the bike-to-work incentive scheme will boost bike use for commuting by 50 percent from 2.4 percent of all work-home journeys, or about 800 million km, with an average distance of 3.5 km per journey. In Belgium, where a tax-free bike incentive scheme has been in place for more than five years, about 8 percent of all commutes are on bicycles. In the Netherlands, it is about 25 percent, according to Reuters.

END_OF_DOCUMENT_TOKEN_TO_BE_REPLACED

Feeling excluded at work is worse for wellbeing than bullying, claims report

Being ignored at work is worse for physical and mental wellbeing than harassment or bullying, says a new study from the University of British Columbia’s Sauder School of Business. Researchers found that while most see ostracism as less harmful than bullying, feeling excluded is significantly more likely to lead to job dissatisfaction and health problems. The study, Is negative attention better than no attention? The comparative effects of ostracism and harassment at work, is to be published in the next issue ofOrganization Science. The researchers found that people rate workplace ostracism as less socially inappropriate, less psychologically harmful and less likely to be prohibited than workplace harassment. Additional research revealed that people who claimed to have experienced ostracism were significantly more likely to report a degraded sense of belonging and commitment, a stronger intention to quit their job, and an increase in health problems.

END_OF_DOCUMENT_TOKEN_TO_BE_REPLACED

Leading academics and experts in the fields of facility management and real estate are meeting to discuss the most innovative concepts to emerge in workplace strategy at the Workplace Strategy Summit, beginning this weekend at the Wokefield Park Conference Centre in Berkshire. The International Facility Management Association (IFMA), British Institute of Facilities Management (BIFM) and IFMA Foundation will come together from 8-10 June to discuss the themed “Innovation on the Edge.” The editorial team at Workplace Insight has produced a special issue of the Occupiers Journal, Work & Place featuring in depth articles, case studies and comments from some of the key speakers at the event. Paul Carder, publisher of Work & Place said: “As well as the journal’s obvious relevance to the creators and managers of places we were also keen to find subjects which are equally relevant to managers of the “work” process.”

END_OF_DOCUMENT_TOKEN_TO_BE_REPLACED

UK local authorities should make better use of their £170 billion estate, including divesting or reusing around £2.5 billion worth of surplus assets, according to a new report from the Audit Commission. The report acknowledges that the estate has already shrunk by a third over the last decade but says there is still scope for councils to be more proactive in the way they manage property, not least when it comes to decisions about the use of idle or underused buildings and land. As the local government estate continues to shrink due to spending cuts and a range of Central Government initiatives such as the One Public Sector estate scheme, it was vital councils understood the properties in their portfolio and regularly reviewed them, according to the report’s authors.

END_OF_DOCUMENT_TOKEN_TO_BE_REPLACED

Around 900 people were evacuated from the Shard this morning, following reports that smoke was coming from the basement of the 1,004ft-high building. Seven fire engines and around 50 firefighters were sent to the building, following the alert at around 10.30. The smoke had begun to dissipate by around 11.45, and this afternoon London Fire Brigade announced it was set to allow tenants to re-enter the premises. No injuries have been reported at the tallest building in Western Europe, winner of the European Award in the Council on Tall Buildings and Urban Habitats (CTBUH) Best Tall Building Worldwide competition; however there were complaints that office workers had to walk down hundreds of steps during the evacuation. Along with retail and hospitality tenants, the Shard has a number of office occupants, including investment bank Duff & Phelps and the venture capital group Foresight. END_OF_DOCUMENT_TOKEN_TO_BE_REPLACED

Many UK firms are unaware of new flexible working rules, or unready for them

The UK is introducing new flexible working legislation at the end of this month, but two new surveys highlight a startling lack of awareness of the changes. According to research from Jobsite, more than half of UK firms and three quarters of employees are unaware of the changes and 25 percent of those firms who are aware of the new law hadn’t considered its implications. The second survey, from QualitySolicitors (sic), found an almost identical lack of awareness amongst SMEs, with just under half of the firms unaware of the new rules and just over a quarter admitting to being unprepared for them. The changes mean that from 30 June, all employees who have worked for their employer for at least six months will be entitled to request alternative working patterns.

END_OF_DOCUMENT_TOKEN_TO_BE_REPLACED

Ahead of the Queen’s Speech today, business leaders from some of the UK’s biggest property owners, developers and occupiers are urging the Government to end the “prevarication” around the introduction of mandatory energy standards for privately rented commercial buildings, amid concerns there is “significant opposition” to them within the Coalition. The UK Green Building Council has released the text of a letter sent to Prime Minister David Cameron by the heads of major companies including Legal and General, Whitbread, Land Securities and Marks & Spencer on the Government’s proposed minimum energy performance standards (MEPS). It argues that commercial buildings are responsible for around one fifth of the UK’s total carbon dioxide emissions. END_OF_DOCUMENT_TOKEN_TO_BE_REPLACED

The Chair of the Women’s Business Council, (WBC) Mitie Chief Executive Ruby McGregor-Smith, is calling for a fundamental change in mind-set from business leaders, to help remove the final barriers to women’s equality. In the Council’s ‘One Year On’ report which included discussions with over 500 companies and individuals over the last year, as well as canvassing the views of male Chief Executives; the WBC concludes that male leaders are important, as visible agents of change, to ensure women are not held back in reaching their full potential in the workplace. Back in June 2013, the WBC published a number of recommendations for business and government to improve opportunities for women. Since then things have been moving in the right direction. But despite this progress, the organisation argues that male leaders could do more. END_OF_DOCUMENT_TOKEN_TO_BE_REPLACED

Construction growth in the three months to June was at its highest peak since the start of the year, driven by a renewed strengthening of non-residential properties, according to new figures from industry analysts Glenigan. Following reports from the Confederation of British Industry (CBI) that the economy is growing at its fastest pace since its records began in 2003,the Glenigan Index, which covers the value of projects starting in the UK over the previous three months, is 20 per cent higher than a year ago. Its non-residential index is up by 24 per cent compared to the same period in 2013, the strongest rate of growth seen since the three months to January of this year; largely fuelled by the private sector, with the industrial, office and hotel and leisure sectors all seeing healthy improvements. END_OF_DOCUMENT_TOKEN_TO_BE_REPLACED

Employers are increasing their permanent headcount at their fastest rate since before the recession. Consistently positive GDP results, coupled with reports that business optimism is at its highest level since 1998, has driven impressive growth across the entire professional jobs market, according to the latest data from the Association of Professional Staffing Companies (APSCo). It reports that the placement of professional talent increased by 29 per cent compared to the same time last year, with particularly strong growth in sectors such as accounting and finance. This mirrors plans by the Big Four accounting firms to substantially increase their graduate level recruitment this year; with KPMG and PwC, for example, both planning to hire 30 per cent more candidates than last year. Although it’s good news for the jobs market – analysts warn that managers must plan ahead to ensure they retain and attract the right talent. END_OF_DOCUMENT_TOKEN_TO_BE_REPLACED 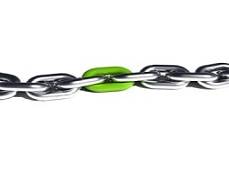 A major new report on the building and construction sector, “Greening the Building Supply Chain”, has been launched by the United Nations Environment Programme’s Sustainable Buildings and Climate Initiative (UNEP-SBCI). The report notes that while the need to understand and reduce energy consumption and greenhouse gas emissions from buildings during their operation has become increasingly recognized, efforts related to the resource use in the building supply chain appear to be less advanced. For that reason the scope of the report, co-authored by Skanska, UNEP and IMS Consulting, extends beyond the well-established benefits associated with green buildings themselves (such as energy efficiency). Instead it is intended to help stakeholders better understand resource use in the building and the construction supply chain as a whole, and identify opportunities to promote greater resource efficiency in the sector as well as and contribute towards wider socio-economic goals. END_OF_DOCUMENT_TOKEN_TO_BE_REPLACED 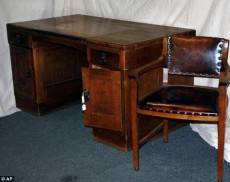 It would have been a bit early for Christmas anyway, but German authorities who have identified the desk Hitler used while working in the Reichkanzlei during the War say it isn’t for sale, despite the fact it would be valued at tens of thousands of pounds to a specialist collector. In 2014, The Associated Press issued a picture of the desk which was made in 1937 and used in a US military base in Berlin up until 1996. Facilities managers being who they are, when it was handed back to the German authorities it had been modified with fax and telephone connectors. The desk is now kept away from the public gaze in a storeroom in Weissensee near Berlin and Germany says it will never be sold, even though it would prove a very attractive acquisition for collectors of militaria. ‘The desk is, and remains, the property of the Federal Republic,’ said government spokeswoman Jacqueline Besse. However, a piece of another desk belonging to Hitler was sold recently.